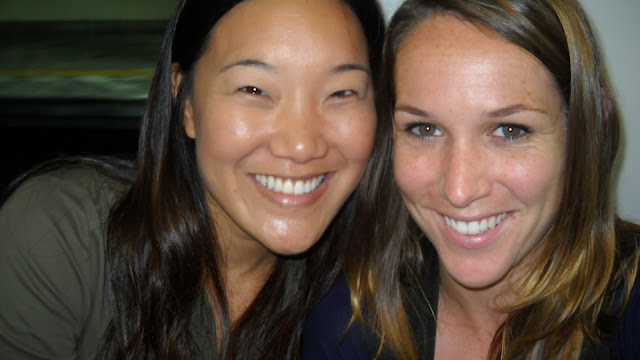 That’s right, her name gets to be the title. That is how significant the role is she has played in the last few days. For those of you who don’t know, I have known Kristin since birth and have grown up with her family, traveling and celebrating most major holidays together. Kristin has just completed 2 years on JET and has about a week left in Japan before heading home to LA to go back to work, bummer. But, we were able to hangout for 3 whole days straight!

Kristin is currently staying in at her Aunt’s house, spending some last minute quality time with them before her big departure. Lucky for me she was able to come to Kamagaya with her boyfriend for one night to see my apartment and little neighborhood. We had a grand night and the following day I went with her back to , about 2.5 hours by train, to her Aunt Reiko’s house for what was essentially a home stay at apparently one of the best Japanese restaurants around. Her Aunt was an AWESOME cook! Her Aunt, Uncle, cousin Shinske (Shin-skay), and dog Cordon were amazingly welcoming! I stayed two nights there just hanging out, eating and skypeing our families. It was pretty neat that they got to see us together considering we are kinda far away. Her aunt and uncle don’t speak too much English and we all know I speak minimal Japanese, and that’s being generous. None the less there were lots of laughs and all in all it was a great time.

Funny story: About 7 years ago, Kristin’s cousin, now 25 year old Shinske, came to LA to visit Kristin and the rest of the Namimoto family. Despite being southern CA residents the Namimoto’s are still very Japanese in a lot of ways (shocker!). Kristin’s mom, Mariko, wanted Shinske to experience and “American” home/meal. Enter the Bohans. I vividly remember him coming to our home and sitting next to Mariko, he wanted something at the table, bread I think, he leaned over to ask Mariko to get it and she told him ‘no’ and encouraged him to try and ask, which he eventually did and as a result was able to enjoy a roll. I remember feeling soooo badly for him, at the time I thought then that was pretty much the worst thing you could do to him. He’s come a long way since then! He speaks pretty good English now, when I walked in to their home I was greeted with a, “Long time no see!” pretty advanced if you ask me. He said that he remembered what we all looked like, and that we said grace and ate chicken. Sounds pretty all-American to me.

In preparation for the Obon that I will be attending Sunday, I bought a yukata!!! NOT a Kimono. A Kimono is made of silk and worn during the winter months, since it’s still pretty efffing hot here, the yukata is (in my mind) basically the summer version, it’s made out of cotton and is light weight. On my last night in , Kristin and I put ours on with the help of her Aunt. Shinske put on his boy version of a yukata, at which point we took some winning pictures and skyped our parents. Mariko told me I blended right in, I mean didn’t it take you two glances at the picture to find the “round eyed” girl ;) 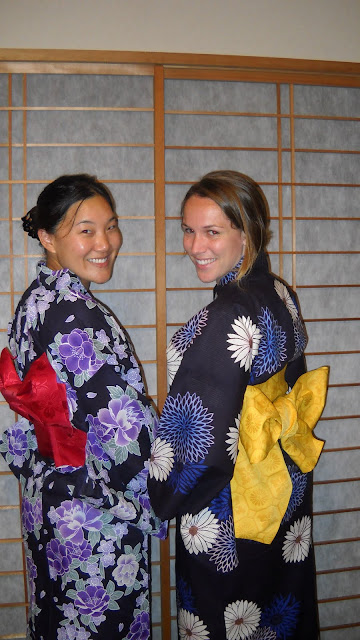 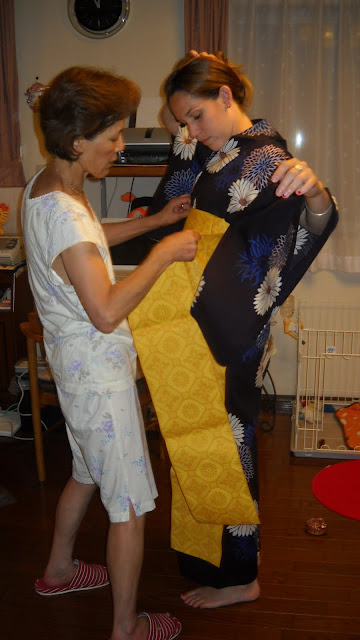 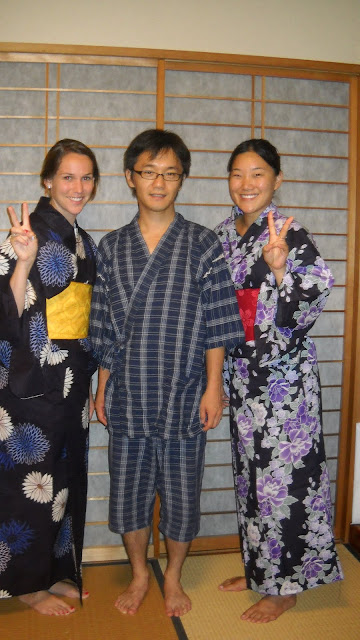 We also took purikura pictures, pretty much my new favorite hobby. I would like one of these machines in my home if anyone cares to make that dream come true.

Accomplishment of the day: I took the train from to Kamagaya all by myself and DIDN’T GET LOST!!! With Kristin and Shinske’s aid, we prepped me for my journey. Printing our directions, going over how to ask for a specific train and/or line. This may seem like NBD, (no big deal, that’s right we’re gonna make you hip with slang while you read) but the trains here, while impressive, are intense. My 2.5 hour trip consisted of 3 transfer points on 4 different train lines, as in 4 entirely different subway maps. While everything is in English as well as Japanese it can get overwhelming at times, especially being surrounded by thousands of brunettes who seem to know exactly where they’re going. But I did great, even using one of my new phrases, courtesy of Kristin, to ask for help once!

Upcoming News: Jessica Brewka, a former roommate, current resident of , and all around one of my favorite people is coming to visit tomorrow!!! On the agenda, IKEA, (I’ll investigate and report back), a day/night in , a trip the 100 yen store and the Obon festival. I’m surprising her with a yukata also, so with her blonde hair she can be as Asian as I. I CAN’T WAIT!!! Prepare yourself Kamagaya.