Sports Day…80% of this wouldn’t fly in America

Sports day, as I believe I mentioned before, is a festival that spreads Japan-wide and is held at the beginning of the spring term as a back to school kick off. The entire school is splits up to be either on the red or white team, I was on the white team! and then they compete in various events. Among other things, some of the immediate qualities that I saw that made it unique were the events themselves, we’ll get to that, and the precision in which everything was done. Like everything else in there is a right and wrong way to do something, and during sports day precision counts. From the marching to the cheering, the kids were quite in sync considering there were a little over 500 of them. Impressive for both the students and teachers. Well done Gochuu!!

So, after 4 days of practice, Sunday finally arrived and it was time for the students and teachers to show proud parents and other local onlookers what we’ve worked so hard on. And by ‘so hard’ I mean hours of repetitive practices in the 90 plus degree weather. Those little kiddos worked their butts off.

The events…
Every time the students began practicing a new event my jaw dropped. NO WAY this would go down in the without a lawsuit from some angle. And with every event the VP would come over to me and say, “They don’t do this in the states?” and I would say with a chuckle, “No, No I don’t think parents would allow it.”

So here we go, let’s start out easy shall we.

Opening Ceremony!
Sooooo cool!! This was one of my favorite parts by far, well this and the closing ceremony which was pretty much exactly the same. I LOVE taiko drums, tell me you don’t wanna go to battle after you see this.

Tug of War.
Exactly what it sounds like, though looks a lot cooler with hundreds of girls! 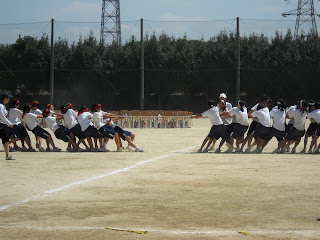 .
Definitely just made up that title. Can’t remember what they called it, but I thought that pretty much summed it up. This is for both boys and girls. Students were divided in to 4 groups of 60 (not everyone participated in every event) and the smallest student was selected to literally run atop their backs. As soon as he touched you, you were to run around to the other end to keep the bridge going. As the bridge, the best technique, I learned, was to grab your ankles, which helped lock your knees and strengthen your back. The students had to go down and around a cone. Side note: students were barefoot and the ground had to be 100 plus degrees, I touched it with my hand and quickly pulled it back. Poor guys. 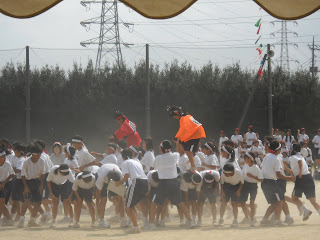 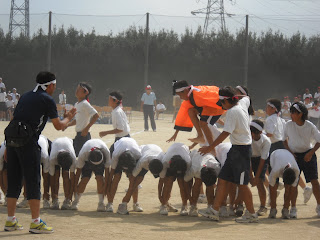 Typhoon.
I know I got that one right. A girls only event. The large group of girls was lined up in rows of 4. The front row would take this large pole and run down and around a cone, then around another cone from the opposite angle and back to their team. When they got back to the group the 4 girls who were holding it, split, leaving 2 and those 2 run the pole under all the girls feet. They have to jump up then duck real fast as the pole come back toward the front from behind. It is on you to make sure you don’t get hit!

Boys Performance.
The boys did a performance that was basically a “look how strong we are” performance consisting of various difficult poses to show their strength, and man was I impressed. I think the pictures tell it all. My jaw was dropped for the majority of their performance. 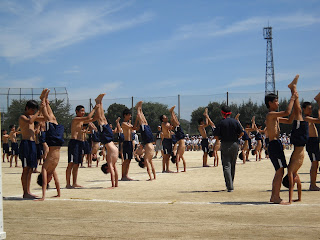 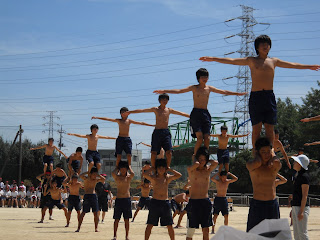 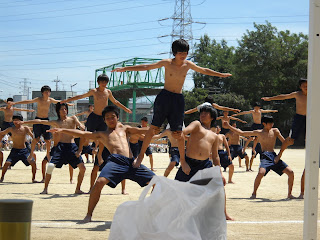 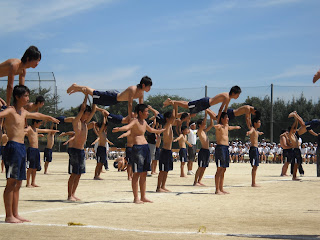 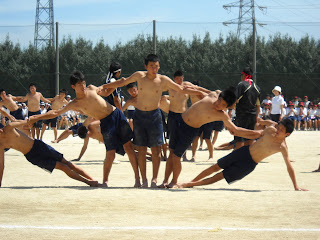 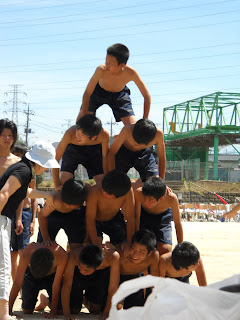 A few kids fell, and I know we had 2 fractured wrists, but other than that no real casualties. Pretty impressive.

Girls Performance.
Some of the 3rd year girls choreographed a dance over the summer and taught it to the rest of the girls. Everyone wore HUGE Minnie mouse type bows in their hair, bright blue, pink and yellow. I am the world’s worst dancer. Yes, I danced. The girls loved that I did. That is the end of this discussion.

Chicken.
Yes, think the chicken game we play in a pool. You know where you’re on someone’s shoulders trying to knock off the other person. Now add two more people to make it more of a throne and have the boys battle against each other. I literally couldn’t watch this, after I saw a few boys bend in some odd angles I couldn’t bare to open my eyes. 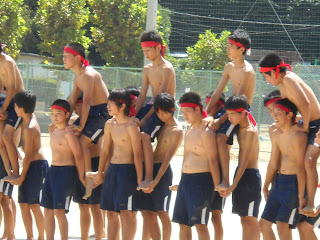 Relays.
Throughout the day there were various running competitions and relays. The day prior to sports day, I stayed 15 min after school and decided to run around the track, I was all dressed to work out and I was already there so I figured why not. The teachers jokingly cheered me on, shouting from the teacher’s lounge balcony as I ran, it was cute.

The next morning I arrived at school and a female teacher came up to me and asked me to join the women teacher relay team. They had seen me run and decided that I could handle it. They also wanted me to be anchor, which was evidently quite an honor by the way they said it. I thanked them and said I’d loved too!

So now it was time, I was where I needed to be and we were racing against students in kind of a fun race. The kids were dressed up in their various club activity outfits, for instance the baseball team was dressed in their uniform using a bat as a baton. It was really cute! We just used a regular baton and wore short and a t-shirt, not quite as exciting ha, but still fun.

We got in our various places around the track and it began. I had already decided that I was not losing. Here’s why…a) I don’t like to lose, especially at running. b) This isn’t like I blended in by any means so I knew every kid/parent was watching and I wanted to do well. c) My teacher teammates really wanted to win, so I wanted to do well for them!

Finally, it was my turn, my teammates had put us in 1st/2nd ish so we had a shot, I got the baton and took off. I may or may not have cut off a 1st year as I made my way to the inside of the track, oops, but I was in first. I don’t know the last time you ran against 14 and 15 year old but they are quick! I was giving it 150%, everything I had and finally reached the finish line, I WON! We got first! As I came off the track I found the ladies, they were soooo excited!!! It was so fun!!

As sports day came to a close, the sun stayed strong. We actually had a brief teacher’s meeting to acknowledge the fact that at one of the other middle schools, the one where Kim works, they had sent over 30 kids to the hospital due to heat stroke. The paramedics finally told them they had to stop their sports day and continue it on the following Wed., which unbeknownst to them would be a day when the first typhoon hit. They just couldn’t win. We, on the other hand, didn’t have any heat stokers that I saw, but after that meeting we made sure to give the students even more breaks and made sure they drank all kinds of water.

After sports day was my first enkai and I couldn’t wait!