A few weeks ago, I headed to the very north of Japan with Jessica and a few friends to experience, Sapporo's snow festival. It was on my list of things to do while I was here in Japan, and man was that a good choice. The festival was spectacular and the group we went with made the trip that much more amazing!

As Jessica was part of the group I went with, she too blogged about it in her fabulous blog, Adventures in Japan. She did such a great job writing about it, that I asked if I could borrow her entry for my own.

Jessica wrote 90% of the following, I simply tweaked it a bit and added my own pictures. She's a great writer, enjoy!
I'm going to preface this entry by saying that I couldn't possibly begin to capture the essence of this trip through a blog entry or pictures. That would involve posting several one-liners and links to youtube clips that would only be mildly funny to you, the reader, and probably lead you to think that we went crazy being stuck together for so long. Quite the contrary. 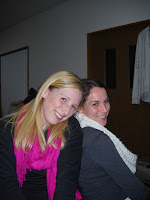 The destination? Sapporo, Hokkaido. The crew? Ben, Michael, Kate, Whitney, Ikumi, Joel, and me. The itinerary? The Sapporo Snow Festival (and ridiculous shenanigans, of course). A trip made for success.

Our entire adventure began Thursday evening (February 10th, to put it into perspective). My dear friend, KEITO CHAN, was arriving from Chiba to join us! Already in the car were Ben (driver), Joel, and me. After swooping her up from the train station, we were off to the grocery store to buy dinner. Kate and I, being the two people that we are, were entirely predictable. Any guesses as to what we chose? If you thought crackers, cheese and salami...you are RIGHT! Also, throw in some Pringles and chocolate-covered almonds in there for good measure. My, aren't we healthy? We met up with Michael, who was already at Ben's house, and feasted upon our junk food while watching youtube videos (hence the reference to it above) and reading excerpts from a book called Tokyo Confidential. It's a must-read for anyone that has been, is in, or will be going to Japan. Shocking stories.


The next morning came early, with a 45 minute drive to Hachinohe train station to meet Ikumi and Whitney and a 10 minute cab ride to the ferry terminal. Let me pause right here...we are currently at seven people total in the group. The original plan until about a week before the trip  was to cram seven people into a kei car, take the ferry to Hokkaido, and then drive another two hours to Sapporo. With seven people. (By the way, a kei car is a very compact car that are common in Japan; they're very economical and I don't know what they're called kei cars). After purchasing our tickets, we jumped on the ferry, eager to begin the eight hour boat ride to Hokkaido.


Let me tell you, the ferry was nothing like I had expected! 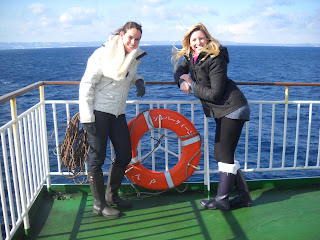 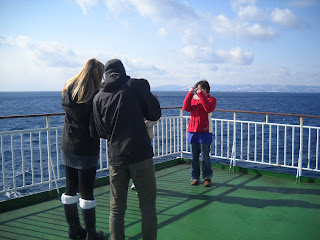 Aaw! Happy people! It turns out, we had a ton of room to spread out, there was an onsen to get all fresh and clean, and a restaurant (final verdict on the food: first ferry food= bad; second ferry food=good). A few naps, a lunch at the restaurant and a walk outside (Japanese air circulation is non-existent), we finally arrived in Hokkaido. Oh happy day! Our bus ride to Sapporo was uneventful and most of all, we just wanted to shower. Two hours later, we arrived in the awesome city of Sapporo. It's a large city like San Francisco nestled in the snowy mountains. The landscape was a beautiful contrast. 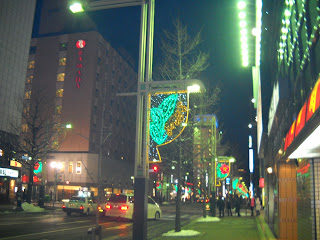 Our group had split up and reconvened for dinner not too far from our hotel in the Susukino area, which I later found out is a prime spot for partying. We found ourselves at a seafood izikaya, a restaurant offering a plethora of sea creatures sliced, diced and cooked at our whim. Sounds tasty, doesn't it? Well, we had a grand time. Michael's Australian friend, Matt, joined us along with his Australian friends, and because we're foreign, we got put in the back of the restaurant. Probably a good decision on the restaurant's part. Things got rowdy after the 3rd or 4th round of double whiskey shots and my camera was able to capture a few of the ensuing moments. 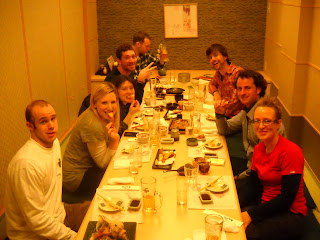 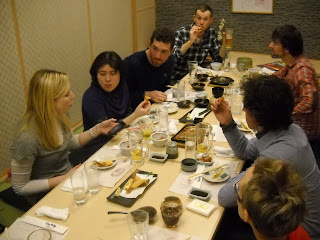 Between departing from the restaurant and heading to karaoke, we lost half the group. The Americans got a bit too wild for the Australians, and they headed home. In reality, they had a big day of travel in front of them, but I think that some of them had one double whiskey shot too many and couldn't handle it. Well, the show must go on! So our smaller, but no less special, group headed to towards karaoke. Ben's friend from high school is not only doing JET, but was also in Sapporo with some of her JET friends. They already had a karaoke room reserved. Perfection. After finally locating the correct Big Echo (a nationwide karaoke chain), we quickly made ourselves at home, added our songs to the playlist and got to singing. The usual shenanigans ensued. 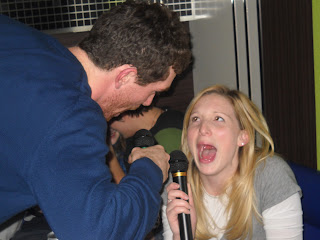 Because we were in a big city, McDonald's was the natural choice for our post-drinking meal, so off we went. Kate and I ordered our regulars (black pepper Shaka Shaka chicken and a Big Mac, respectively) and we all engaged in some pretty hilarious conversations that will never be recalled, unfortunately. You're all disappointed. We returned to the hotel, which would be a good time to show you how large our room was. We were able to fit five of us in there...pretty impressive.

The next morning we dragged ourselves out of bed at a reasonable hour, got ourselves a breakfast of champions at a convenny, and headed to the snow festival. Oh yes! The motivation for the entire trip. Essentially a series of snow and ice sculptures spread throughout the city, the Sapporo Snow Festival has been attracting people from all over Japan for over 60 years. We had seen a few the night before in Susukino, but today was totally focused on seeing everything. What we learned that day: the city of Sapporo and the vendors at the festival probably didn't take advantage of any native English speakers to proofread their signs; boots meant for rain are not insulated enough to be walking around in on snow and ice; going to the snow festival at the end during a particularly warm week in February probably isn't the best idea; Hawaii is a country, or at least is meant to represent the entire United States; Food from the Americas was represented by something called the New York Burger, which seemed to be your standard  cheeseburger with a fried egg...oh yea, I have that all the time. 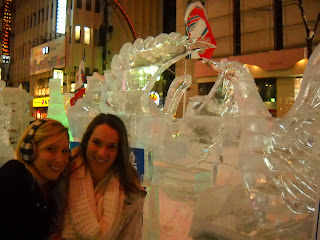 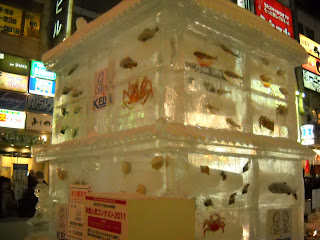 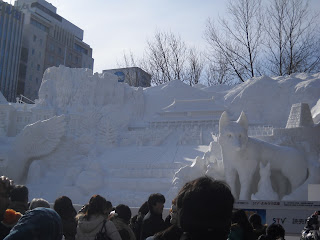 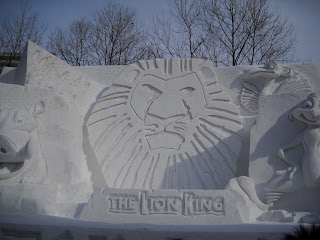 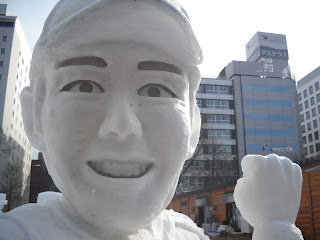 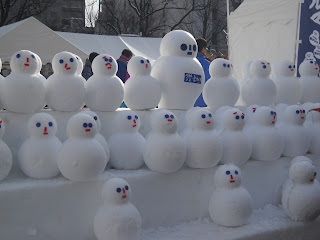 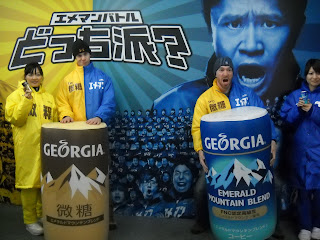 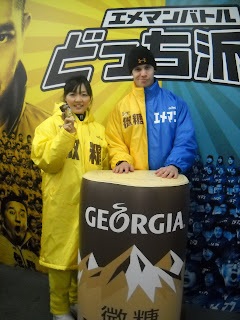 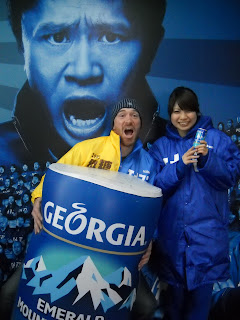 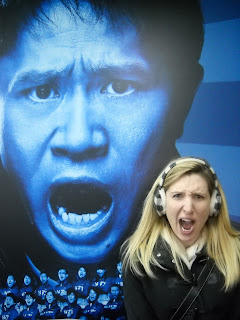 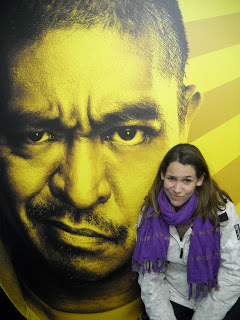 After adding a few to the crew, we headed over to the Sapporo Beer Garden for some nomihodai (all you can drink/eat). This particular nomihodai was limited to 100 minutes, so it was the goal of all 15 of us to shove as much Ghangis Khan and down as much Sapporo beer as possible in that time frame. The food was your standard yaki niku, with all lamb. The place provided plastic bags (which we assumed were to bag your clothes so they didn't stink of lamb afterwards) and bibs, so the grease splatter from the pan didn't stain anything. Charming. I decided the best way to go about this was to pace myself with the person next to me, who just so happened to be Joel. We're about the same size, although being a guy I believe him to have a much higher tolerance than me. I kept up, even with drinking darks and half/half...but I did lose count. Kate suggested we do a throwback to college days and keep count with marking on our arm. No one had a marker. Damn. 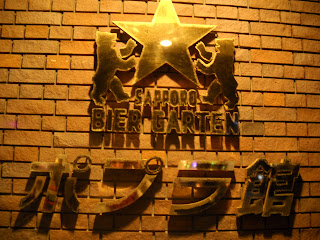 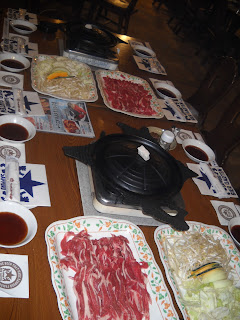 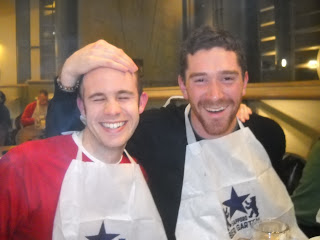 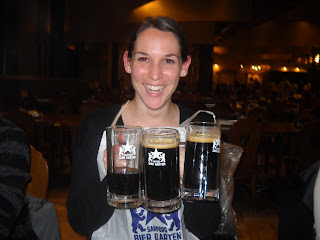 When our 100 minutes were all up, there was talk of karaoke, but we migrated to another bar that was known for its something or other. To be honest, I wasn't paying attention. Upon crossing its threshold, I felt like I was back in America. The place was full of gaijin. There were JETs from all over the country and several military as well, mostly from Aomori prefecture. I'm not sure how much time passed while we chatted and drank away, but we soon found ourselves, once again, at McDonald's. Shocker. We all had our same orders, except Kate had managed to convert Ben to the Shaka Shaka chicken. Well, this caused quite the stir! While Kate and Ben were "shaka'ing", a foreigner (we took to calling her Russian girl...not sure if she really was) behind us made a few comments about quieting down. No one in our group heard except me, so, being the intoxicated troublemaker that I was, encouraged them to continue "shaka'ing" louder, if possible. Russian girl commented even louder this time, "I need it quiet in here!"...and that just got us all laughing uncontrollably. First of all, it was 3am. What the hell was this girl doing at Mickey D's at 3am if she needed quiet? Everyone knows that's the post-drinking/drunk food stop! Of course, her comment encouraged Ben to move his "shaka" performance from our table to standing in the aisle, much to the delight of a couple of Japanese girls sitting next to us.

NOTE: Had the woman who commented been Japanese, we would've complied with her requests...it was simply because this lady was a gaijin at a McDonald's at 3am on a weekend asking us to quiet down. Ridiculous? Yes, I think so.

The next morning, we dragged ourselves to the ferry station to board our nine hour ferry back to Aomori. Although not exactly thrilled to end the weekend and return to our "normal" lives, it was certainly a trip to put in the books. Like I said, I don't think I was able to properly capture the essence of the trip through this entry...


The trip really was amazing, and Jessica did such a nice job capturing it! Hope you enjoyed having a guest writer!

Excited to cross something off her Japan to do list,
Kate
Posted by Kate at 3:25 AM