Back in March when I received the title of Parade Queen, I was fortunate enough to receive a box-load of other goodies. One of the prizes was a free night stay at the Bayside Marina Hotel in Yokohama.
I had been so excited to use it; I had never been to Yokohama before! But things were kind of hectic with the earthquake and trip home so I was waiting for things to die down. When they finally did, I  was always hesitant to call because of the language barrier. 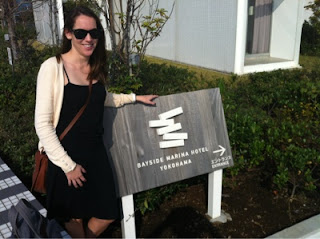 On a good day I could probably make a reservation in Japanese, but if they didn't speak English there was no way I could explain that I had a voucher for a free stay because I was the Tokyo Irish Parade Queen. No. Way. But I had a free weekend coming up and was looking for a change, and I had enlisted a friend to join me, so I braved it and called. Low and behold! The lady was fluent and even remembered the reason for the voucher. I forget that in the big cities, outside of Kamagaya, people do speak English.


We had a reservation for that Saturday, packed out bags and were prepared to make the most of our one night stay in Yokohama.

Meet my travel buddy, Jeff, new-ish to Kamagaya, by way of Wisconsin.
The train ride to Yokohama is about two hours from little Kamagaya, but we stayed entertained... 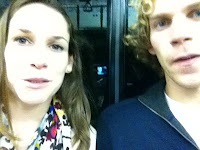 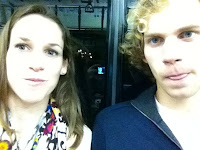 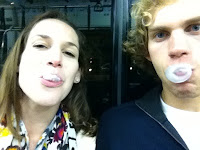 I kinda love these awkward pics as we attempt to blow bubbles.

It was amazing. Clean and modern and right on the water. The hotel was also located right next to a set of shopping outlets. I think it`s fair to say that I was more excited about Jeff when we had that realization. 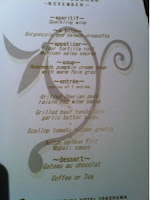 Included in our lovely stay was dinner and breakfast. We had no idea what to expect. Dinner turned out to be five course meal; we were pretty much giddy with excitement when we saw the menu. I haven't seen food like this anywhere in Japan since I've been here. It was all so amazing. Every bite.                       *Sorry some of the pictures are rotated! 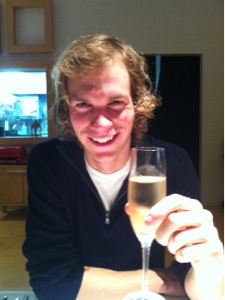 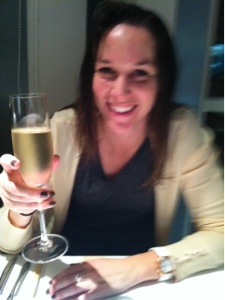 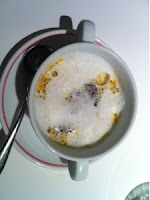 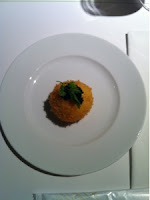 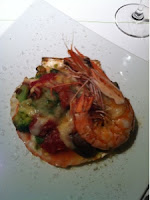 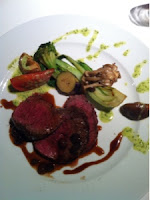 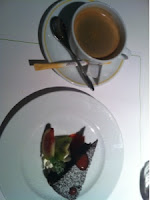 After dinner we were off to explore the city. After Tokyo, Yokohama is the second largest city in Japan, and with that title comes tourist attractions-one of them being the massive Ferris wheel, a prominent part of the city's skyline. The wheel was once the tallest in the world, until Japan out-did itself and built a bigger one in Osaka. On the wheel sits the world's largest clock. If you were expecting a hand clock like I was, well I am sorry to disappoint you, but the clock is digital. And yes, it's big.

Then it was off to Cosmo World to play the arcade games, ride a roller coaster and act like we were 12.

The Faces of Focus. 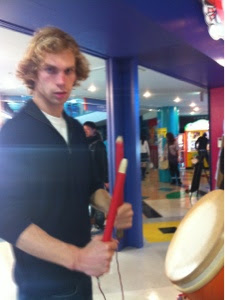 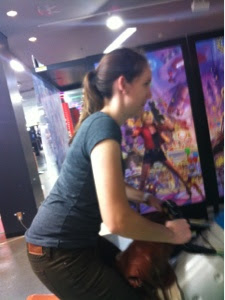 The next morning we woke early to meet our 10am checkout and take full advantage of the breakfast we were being provided. We were pleasantly surprised to find it had eggs, bacon, avocado and all kinds of other things I hadn't seen in combination since moving here. It was great and hearty. A great send off as we went to tour the city.

During breakfast we decided to hit up the aquarium first. During breakfast we mapped out the train lines and then were off. The Redondo Beach side of me was quite excited. It happened to be surprisingly warm that day as well, making the combination of underwater animals and warm weather almost more than I could handle.
Our aquarium ticket was actually good for three aquariums all on the island. One of which was solely for dolphins. At the entrance was this lovely display, DOLPHIN CHRISTMAS!! Jeff and I were trying to guess if the little dolphins would have Santa hats on, they did not; but I wouldn't put it past Japan. 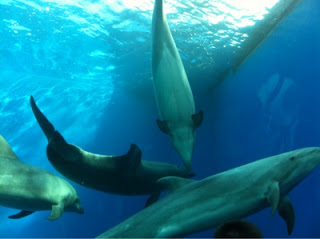 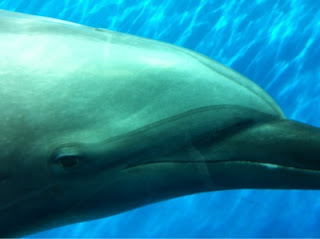 Yokohama is also famous for having one of the world's largest Chinatowns. I have never been to China, but a friend of mine studied abroad there and has also been to this Chinatown. According to him this one is spot on. `I felt like I was right back in Hong Kong!` he reported to me after his return. I walked away feeling like I earned another stamp in my passport. 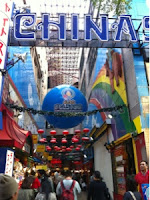 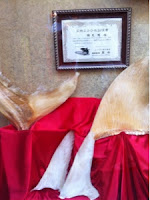 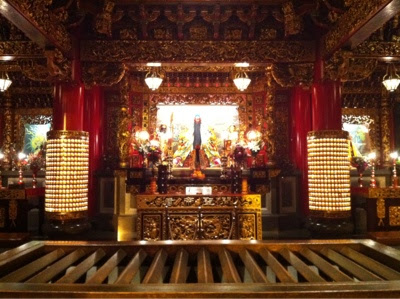 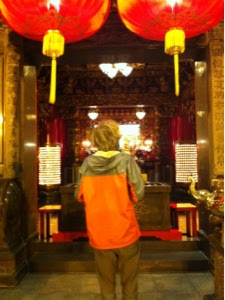 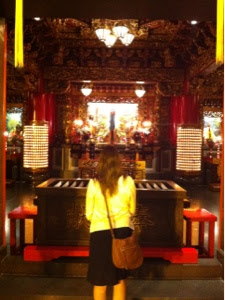 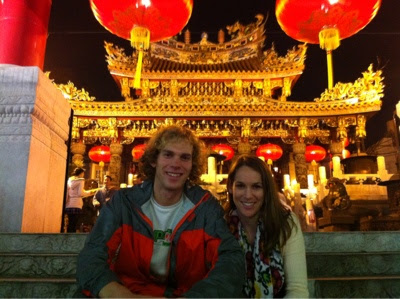 In researching Yokohama, we had also read about Yamashita park: a famous, beautiful park right on the water. We figured we'd grab some food in Chinatown and head to the park to sit and eat. But when we got there, there were people everywhere and drums in the background. It was obviously some kind of festival. Then we saw the stage and massive African Fiesta sign. Questions answered.There was a booth for food representing every African country. Chinese food went out the window. 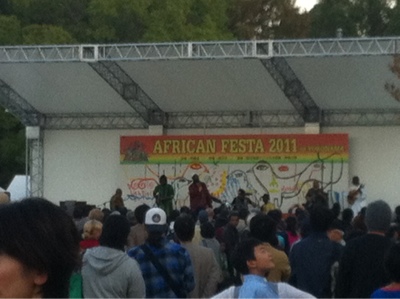 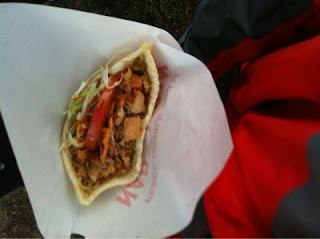 We tore ourselves away from the food to walk along the water to look at the other booths. On our walk along the water, a few people from one of the booths ran up to us, asking if we spoke English. When that was apparent they asked if we wanted to try on the traditional garb one of the men was wearing. It cost 100￥and the money went to a charity that provided prosthetic limbs for people in Rwanda. Before Jeff fully understood what they were asking of us, I told them we were in and pointed to Jeff. They were SO excited and began dressing him immediately. I whipped out my money and stood back, taking pictures left and right. The pink shirt with leopard print collar is my favorite part, hands down. 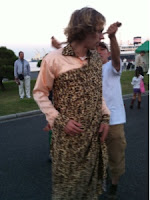 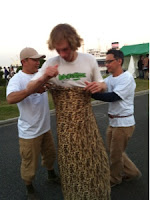 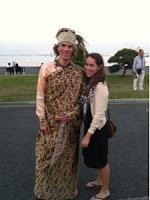 It was such an amazing weekend! Loved exploring a new part a Japan.

Must Read: Japan to play world cup qualifier in North Korea-from The Guardian
Google Search: Jerry Sandusky
Tune: All About Us By He is We Feat. Owl City
Accomplishment: mastering the route from school directly to the gym, which means I won't go home first and get stuck in my apartment, asiago bagels from Costco
Obsessions: planning upcoming Thanksgiving, getting excited for Tori and Claire`s visit