After receiving my invitation a few weeks ago, I finally was ready to head out to dinner. Layering a new chunky sweater over a summer dress and leggings, I grabbed my tiara and sash and headed to one of the most unique places I have dined, probably ever. I met a friend at the train station, he led the walk as we may our way to the Irish Ambassador to Japan's residence for dinner. The dinner was to the thank the people that planned last year's first ever pageant, and annual St. Patrick's Day parade in Tokyo, though last year we swapped the parade for a record setting earthquake.

We arrived at dinner and the mingling instantly began. I saw so many friendly faces that I hadn't seen in nearly a year. I gave out meshi left and right, collecting about 30 business cards myself. We chatted about how great this year's parade was going to be, with all the proceeds going toward the disaster regions that still need our support. It had been announced a few days earlier, that since I never got to full-fill my duty as Parade Queen last year, I would get to do it this year. There is not going to be another pageant this year, and 2012 is essentially going to be a do-over from last year.
I can't wait!


After choosing between wine, Baileys and Guinness for a beverage starter, we all turned our attention to the podium as His Excellency John Neary gave a welcome speech. He thanked us all for coming, doing his best to mention the many organizations that were there by name. Even mentioning mine! His accent turned my last name from Bo-han to Bo-wen, the way it's pronounced in its native Ireland. I smiled. There was a muffled oh! from the audience and a few looks around as people looked for the queen in the room. The man next to me who I'd been chatting with nudged me. I smiled again.


Then it was time to eat! The 200 or so of us lined up for one of the best meals I'd had in a while. I piled my plate high, with amazing cheese, lasagna, salmon, salad and Irish soda bread.

During dinner one of the guys explained he was a magician and wanted to perform some magic tricks for/with us. He had me write my name on the queen card, because it's only appropriate...
Making it appear and disappear so quick I could barely keep up. I was duly impressed. 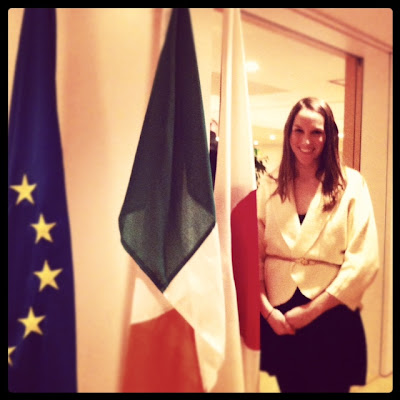 Must Read: Chocolate Advertisements in the 20th and 21st Centuries ...from Slate
Google Search: Guam
Tune: Stronger By Kelly Clarkson.
Accomplishment: A clean inbox.
Obsessions: Bacon, thanks to Costco.