I went to Kim's house to tell her of my latest debacle, and ask if she would use her amazing Japanese skills to explain to our Board of Ed(BOE) that my refrigerator had rebelled against its cooling task. She did, and our BOE said that someone would be out to look at in a few days. The man came, he looked, then asked if I understood Japanese. ''Skoshi dake,'' I replied. It's true, I only understand a little, but I had recruited Kris to sit next to me in case the refrigerator whisperer had something potentially important to say. The refrigerator whisperer turned to face us and said, ''Anatta no reizoko...,'' then paused and made the full arm X. The most undeniable gesture around. It was official, my refrigerator X.  Well, crap. Again.
I headed back to Kim's.


Our BOE reported that they were working on it. Between sitting and waiting, I strategically shopped at the grocery store, avoiding most perishable items, stored a few things at Kim's and ate out the rest of the time. Then, Kim got a call the other day from the BOE saying that a man would be by Wednesday to replace it and would I be ready. Well of course!

It's Here!
The men, through gestures and Japanese, explained that I wasn't to plug it in until 7pm. They also taped this lovely illustration on the fridge so there would be no questions. They probably could have done without the clock, but thanks for going the extra mile. 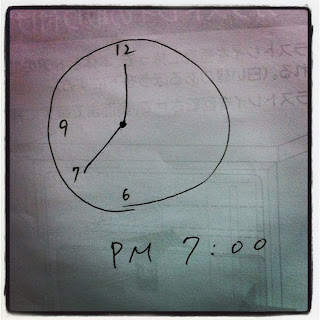 As you can probably gather, I'm a pretty big fan of my new fridge. All modern and sleek. I went shopping last night and bought all fresh veggies and dairy products. I was then, probably more excited than necessary, to organize them in my sparkling clean, beautiful smelling, reizoko.
It was a perfect Wednesday treat.

Email ThisBlogThis!Share to TwitterShare to FacebookShare to Pinterest
Labels: home