BREAKING NEWS: Kamagaya just got a Dominos!
Was the text I received last Monday, from my friend and neighbor, Kris.

shut.up.
Was my response.
I had been praying for some local pizza that came sans mayonnaise and sea animals.

Kris had passed the latest and greatest addition to Kamagaya on his ride to school earlier in the week, and had been scoping out its daily progress. Kris reported that they appeared to have the signs up, promising a buy one get one free, promotion to celebrate its grand opening, though he couldn't see workers inside. Japan is know for the speed in which buildings go up and into operation, I swear some appear overnight so we all took bets that the store would be up and running by Friday. 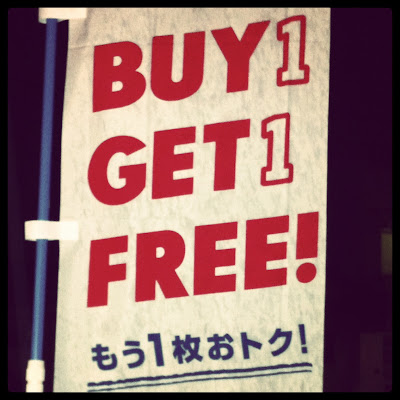 We had no idea that this little experience would be such an emotional roller coaster...

Friday Kris texted everyone to say that the fliers were out, delivery scooters were ready, people were inside and lights were on. He copied down the number for delivery and we quickly organized a pizza and beer dinner at my house. The excitement was palpable.
We were so excited!

We found a Dominos website online...IN ENGLISH.
We were thrilled!

I texted, called, and vibered everyone who was enroute home from work.
Taking down names and orders.
Kris tried calling first and was doing ok until the woman asked him something he didn't understand.
He panicked and hung up.
Nice job Krisu.
We were embarrassed.

Once orders were sorted, we went to Kim and her rather fluent Japanese. She called the number Kris had and a woman answered. Kim asked if they delivered to our area, and we all understood when the woman said no.
We were puzzled.
The place was no more than a 10 minute bike ride away, but we chalked it up to the recent opening. Though one of us joked that maybe Dominos was racist. We chuckled.
Leave it to the foreigners to place the first order at our new Dominos.
We placed our orders and elected the 3 people who would go pick up the pizza in 20 minutes.

Kris, Rachel and I walked to our bikes, sat down, and it started raining.
We were bummed.
But nothing a little American pizza couldn't fix.
We biked the 10 minutes in the rain and parked our bikes under the Dominos sign that was no less than 5 stories high. 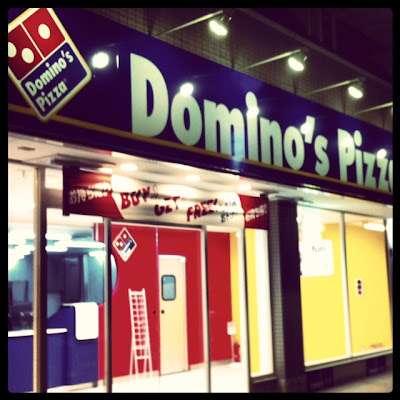 We walked into a brand spankin new Dominois building. It smelled of plastic and freshly assembled pizza boxes. The 6 or so workers looked at us, smiled, and asked if they could help us.
We explained that we had placed an order under, Kiiim-ba-ly. They looked at each other.
Then to us. Telling us they weren't open until Saturday.
Then who had we talked to?
We were perplexed.
We explained that we had called the number outside, and spoke to someone.
Mr. Dominos said that since they were not open, the number had been rerouted and our pizza was waiting in Matsudo.
About a 20 minute train ride away.
Damn.
So are we getting pizza? Are we not getting pizza?
The employees talked among themselves, and felt so bad, saying it was their fault for the mix up. They explained that they were going to make our order right there.
You could almost see the stress and excitement, as their boss must have said to them,
“Ok guys, this is not a drill! Apron, dough, sauce, cheese...go, go, go!”
Kris, Rachel and I smiled and chatted to the manager who surprisingly spoke English.
We apologized profusely.
We felt so bad.
He assured us it was ok, and confirmed that they would be delivering to our area in
the future...starting next Friday. Ooops.

Finally our pizza was ready.
YAY!
We overly thanked everyone in the place, sheepishly smiling and apologizing.
Promising to be back when they were open for real.

We biked back in the rain, as fast as possible.
I was hungry and I think part of me thought they were going to chase me down and take my pizza away.
We made it home in one piece, not entirely true for the pizza after I flipped it to make it fit in my basket.
Passed out beers and had a lovely, extremely familiar meal.
Made only better by the reality that their were a few times this meal wasn't going to happen at all.

Must Read: 12 Problems Busty Girls Have...from Buzzfeed. I chuckled, though none of these apply to me :)
Google Search: Free Attractions in Hiroshima.
Tune: Call Me Maybe By Carly Rae Jepson.
Again.I'm obsessed with this song, even though it makes me feel 13.
Accomplishment: Studying Japanese rather consistently.
Obsessions: Painting my planters.
Posted by Kate at 6:30 PM