The other day, all the 3rd graders gathered in the gym for a special assembly. A professional basketball player, Nobuyuki Saito, was coming to talk to the kids about what it is like to play pro basketball...in a wheelchair. He rolled in and spoke to the kids for about 45 minutes. I didn't hear the speech, as my Japanese is limited and per Namiko's suggestion, I opted for the air conditioned teachers room rather than the sweltering gym, but I had planned to go in for part two of the assembly.

*I'm sorry for the poor quality of some of pics, things were happening so fast, my iphone couldn't quite keep up.*
I walked into the gym just in time to see a few students get strapped into wheelchairs and get ready for a 4 on 4 wheel-y basketball game. The selected students were so excited to try out the wheelchairs, while those on the sidelines were praying they weren't selected to play.

When I walked it, I was surprised to see the title of his speech on a banner over the stage. In bold English it said, Do Not or Cannot. Namiko then leaned over to me and explained that post his motorcycle accident, Nobuyuki went to Florida to get treatment, and as a result spoke fluent English. So rarely in little Kamagaya, is there a fluent English speaker around, at least one I don't know,
I was dying to talk to him.
As I was pondering all this, and not really paying attention, one of my favorite little girls ran up to me with a bib, encouraging me to put it on. I hesitated and tried to politely refuse. Then she went on to tell me in Japanese that it was a sensei game, and I, as she reminded me, was Keito SENSEI.
Touche, Aya. Touche.

I put up my hair, put on my bib, and walked to the center of the gym amongst shocked and cheering students. A lady came over to buckle me in as I tried to situate my skirt so it wouldn't blow up.
She chuckled and asked if I would be ok.
I had no idea.

For a few minutes I rolled around getting used to the chair. It was built for sports, so it was light weight, and easy to swivel. There was a wheel stemming from the back of the chair that prevented you from flipping over when shooting the ball. I was surprised to discover that it was similar to snowboarding and skateboarding in that, if I was in motion, I could control the chair by simply leaning from side to side. I was having a great time getting used to the chair and was thrilled to start the little 10 minute game. This is going to be fun! I thought. Then quickly reminded myself that the reason it will be fun, is that I will be able to get up and walk out of here.
Big picture Kate, big picture. 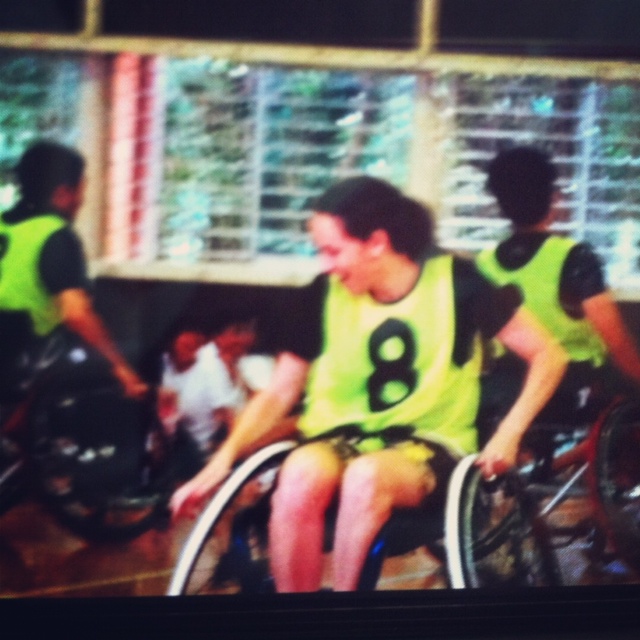 Before the game, Nobuyuki wheeled up next to me and asked, in perfect English, if I spoke English. I said yes, and he asked if this was going to be my first time playing in a wheelchair, I told him yes, and he assured me it was just the same as regular basketball.
I wasn't sure that was entirely true, but I told him I thought I could handle it.

The game started and was great fun! Obviously we didn't dribble, but instead put the ball in our laps and rolled as fast as possible to the basket. I had the opportunity to take one shot and totally air ball-ed it. It took way more strength to get it to the backboard that I was prepared for. A few other times I had trouble changing directions as quickly as I wanted and wound up doing donuts.
Though, I would be lying if I said that wasn't my favorite part.

When it was all over, the students gave Nobuyuki and his crew flowers to show their appreciation, and everyone filed out and went back to class. I hung around with a few of the student council kids to chat with everyone. Nobuyuki again rolled up to me and asked where I was from, kicking off a 15 minute conversation. He explained that he lived in Florida for a few years, then moved on to Mobile, Alabama. Instantly reminding me of this YouTube clip.
Which I then proceeded to tell him to look up.
I asked him how that was, and he replied with a deadpanned... boring. I chuckled.
He went on to say that he was so thankful that he didn't pick up the southern accent, and did I know that there are a lot of red necks down there?! I laughed right out loud.
While we talked, I accidentally brushed my right thumb against my skirt and let out an involuntary, ow!
I looked down to see a massive blister. Think rug burn. Apparently I had been using my thumb as a brake. He asked if I was ok, and I mentioned that I got a blister from all my wheeling.
He chuckled. As if he didn't know, I mean, really.
Then he held up his left hand, where he was missing part of his index finger, and says,
"Ya, I know, this happened to me."
"WHAT!" I shrieked, "from wheeling around?!"
"Jussstttt kidding. No this happened from my accident too."


Almost had me there, Nobuyuki.

He had such a great personality and sense of humor.
He was truly an inspiration.

Must Read: 10 Things Americans Don't Know About America...from PostMasculine.
Any American who has visited or lived abroad will most likely be nodding their head the entire time.
Google Search: Which came first, the chicken or the egg.
Turns out there is an answer now, it's the chicken. I lost this bet.
Tune: Take a Walk By Passion Pit.
Accomplishment: A well executed lesson.
Obsessions: Color Map Countdown.