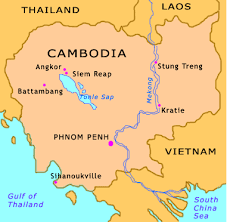 
kiana and i arrived in phnom penh at about 2am, got our visas at the airport and took a taxi to our hostel. they had stayed up late to let us in, which was very kind of them. as we drove from the airport through the dark and relatively deserted streets, i think we both began to wonder what we had gotten ourselves into. everything looks sketchy at 2am. especially cambodia. but the next day when we came downstairs for breakfast, it was bright and sunny, with so much life just outside our hostel. we couldn't wait to explore. we stayed in phnom penh for 2 days in our awesome hostel, and spent another 2 days by the beach in sihanoukville in a rather swanky hotel (only because it was so cheap!). it's a long story, but unfortunately we were unable to see ankgor wat, we were a little bummed about it. guess we'll just have to go back!

a few of the many nifty people we met...
-sary of sary's guesthouse.
-tutti and co, who we met on the bus from cambodia to vietnam. glad you guys made it home safely!
-the woman on the bus who let me try her mangostein.
-the cambodian man at the bus stop who taught us how to say a few things in cambodian and made sure we got on the right bus.
-the cambodian native traveling with her british family, who bargained down the price of a tuktuk for us, as we literally were encircled with drivers yelling at us.
-mark and victor, a lovely couple we met on the bus who taught how to say a few words in bulgarian.
-anna, a french film maker who was filming a documentary on the children of cambodia.
i wanted to be her. because she travels so much, she didn't have an apartment, only a storage unit in paris for her things. anna explained that she would write down what city she was in and put it under her pillow, so she wouldn't panic in the morning not knowing where she was. i mean really, how bad-ass is that?!
-anna's cambodian counter part, who had a conversation with me in japanese. random.
-the owner of a smoothie shop, who led us to the table right under the a/c. thank you sir.