Since I arrived in Tokyo for JET orientation almost 2 years ago, the subject of kyuushoku, or school lunch, has always been a hot topic. Actually, it wasn't so much a topic of conversation, but rather a challenge to see how long we'd all last.

In the schools here, everyone, and I mean EVERYONE,  eats kyuushoku, I actually have never seen a person bring their own lunch. Not only that, but it is quite the production. Every month the students take turns serving out the hot meal to their classmates, assembly line style. The whole class waits until everyone has their lunch, then together we say itadakimasu and dig in. The lunch always consists of a milk a few degrees warmer than I'm used to, soup with some questionable things in it (fish balls, chicken parts), bread or rice of massive quantity, and a main dish that can be anything from a few entire fish, to pasta with seafood cream sauce, to curry. All that said, that lunch isn't bad, per-say, though it is massive. Usually upwards of 800 calories. When I first arrived, I ate everything on my tray, and as a result felt nauseous every. single. day. But Japan will be the first to tell you, mottai nai. Don't waste. So, in an effort to be a good example for the students, as they struggled to get down all their food, I ate...and ate, and ate.
In record speed mind you.

However, since the new school year in April, I've started to eat only a fraction of my lunch, and low and behold, have lost weight. Even more recently I started craving salad for lunch on these increasingly hot days. That craving was only made stronger by the fact that, I swear, lunch in Kamagaya as of this school year has gone downhill.

We are not mandated to order kyuushoku, though it is cheap, convenient, nutritious and most importantly, what the group is doing. I mentioned to Namiko, one of the teachers I work with, who is also not a kyuushoku fan, that I was thinking of quitting school lunch. I have been here so long, that even the idea of not having the provided lunch caused me an enormous amount of guilt. Namiko assured me it was absolutely ok. Though admitted that she was envious of the fact that I could bring what I wanted, while she had to be a good example for kids and continue to be a team player. That afternoon she went and told the office ladies I quit, and that was that.

Kyuushoku and I have officially broken up. 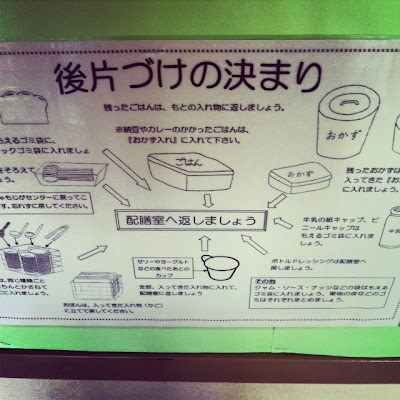 We are only on day 3 of homemade lunches, and I am throughly enjoying my colorful, generally California themed, meals. Plus I get to use all my IKEA tupperware!

Odd One Out,
Kate