One Saturday a month I teach an advanced English class, and boy oh boy do I love talking to this group! They are very good at English, all are pretty well-traveled and quite a few have worked abroad. I usually try to create lessons that get the seventeen or so seniors to debate and voice their opinion, something that isn't always doable in many English classes in Japan. However, because the majority of this group has lived abroad, they all have a bit of a western mindset when speaking English, which makes opinionated discussions feasible. I usually try to choose safe topics, sticking to interesting articles or current news reports.
But I really pushed the envelope last weekend.

I introduced the topic of Men vs Women.

Off the bat it doesn't sound all that controversial. But when we get into gender roles etc, it can be. Also, remember that this conversation is taking place in Japan, which as a culture has strict gender roles. That, plus my audience is predominately made up of senior citizens, who may or may not hold to the traditional roles. I wasn't sure how it would go over, but just to suppress my own curiosity, and because I have been know to stir up trouble (only sometimes I swear!), I had to give it a try.

The lesson went like this...
After I told them the topic we were going to be discussing, we made a list of the traditional roles of Men and Women on the board. Their answers were what I expected; people should get married, women should take care of the kids, men should go to work.
Then I introduced them to this article, about a mom who decided to raise her child as gender-neutral. The article is pretty interesting, though really far-fetched for Japan on the whole I would say. But this group took it like champs and we discussed the pros and cons of raising a child as gender-neutral. My only goal with this was to get them to maybe, kinda, sorta, understand the mother's reasoning, and not write her off as crazy.
Then I explained that we were going to to an opinion walk. I printed out 11 sheets of paper with bold statements on the top, such as, Women should not be allowed to drive. Men should make more money. etc. For about 15 minutes they were to walk around the room and anonymously respond to the statements as well as to other people's responses. The idea being that they were having a conversation on paper. If the statement made them uncomfortable they could skip it.
For the last five minutes of class they were told to take another walk around the room and simply read the conversations. 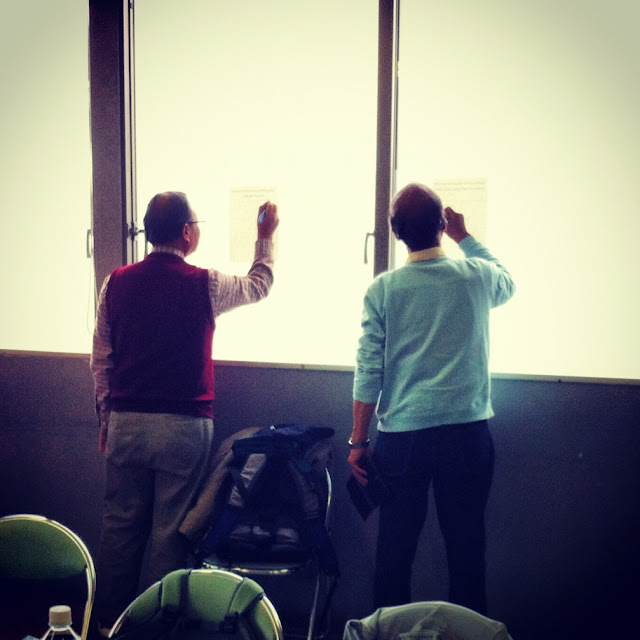 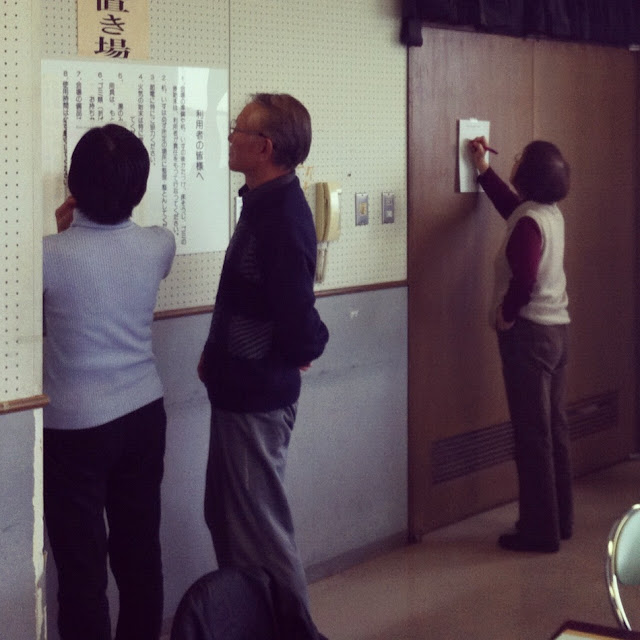 Here are their responses.
The English isn't always perfect, but you can completely understand what they mean. 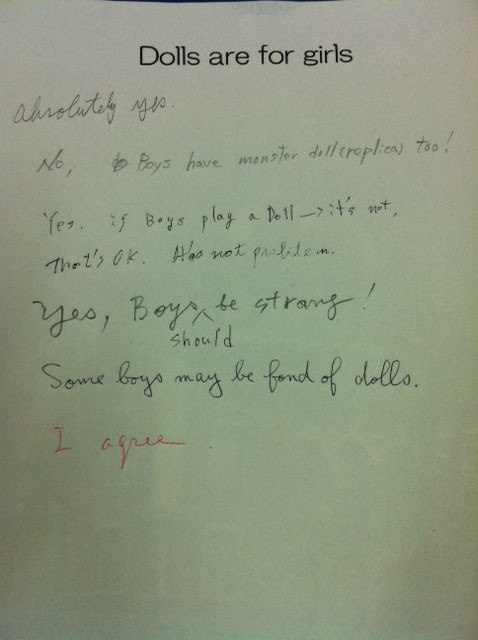 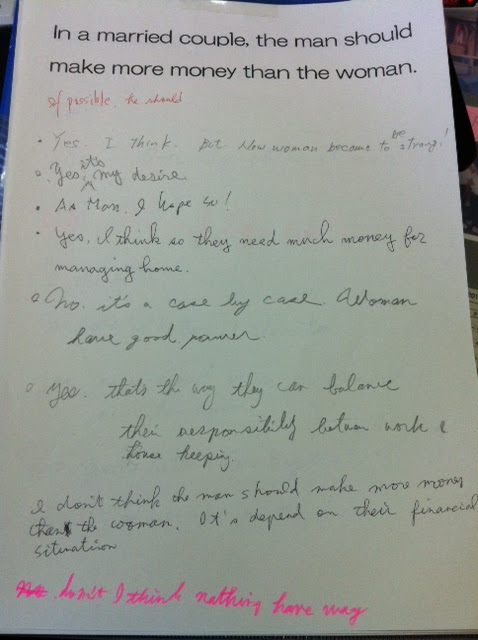 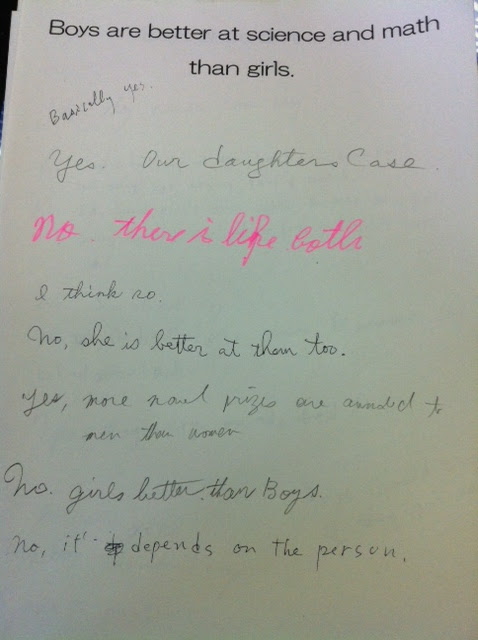 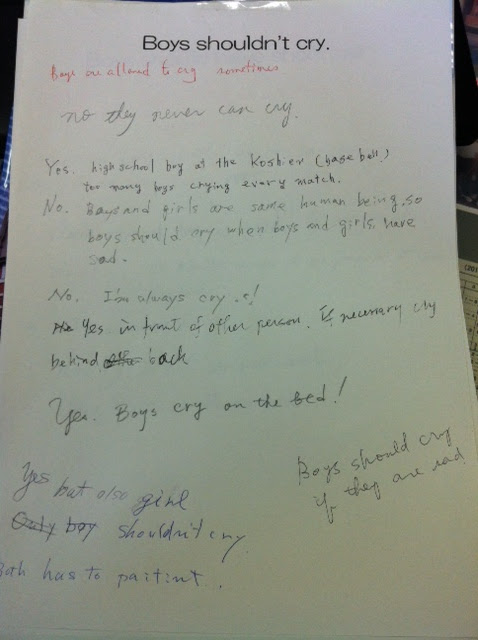 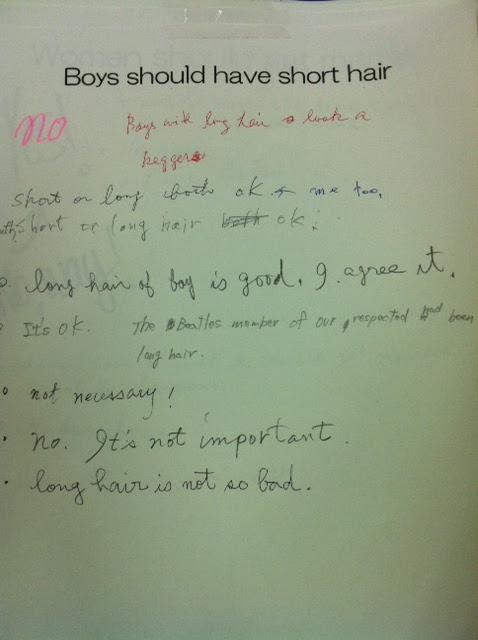 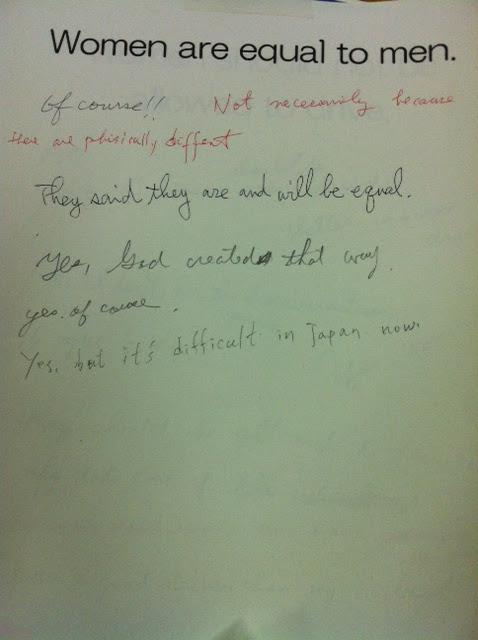 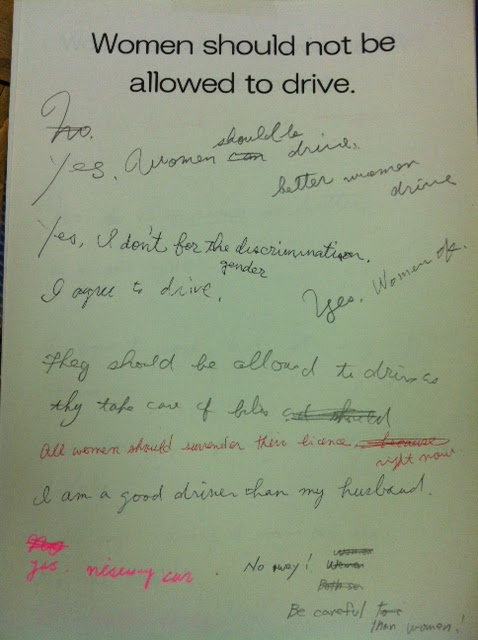 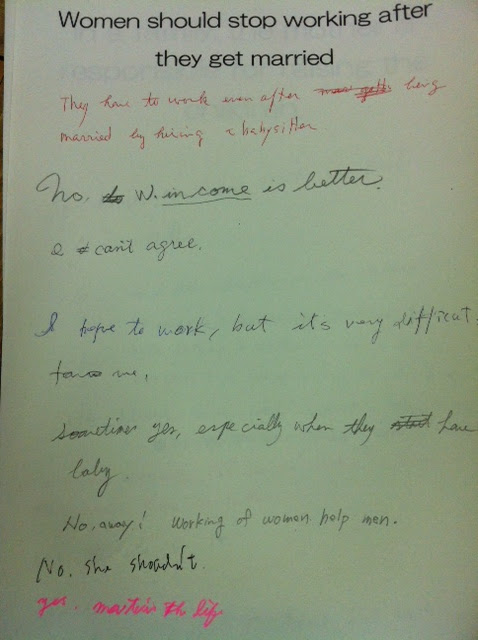 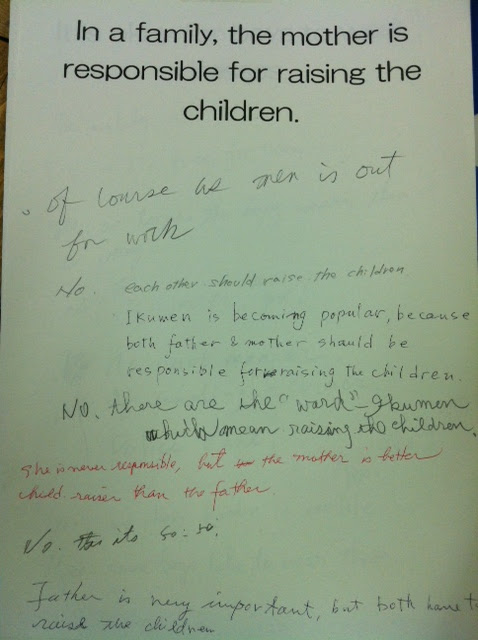 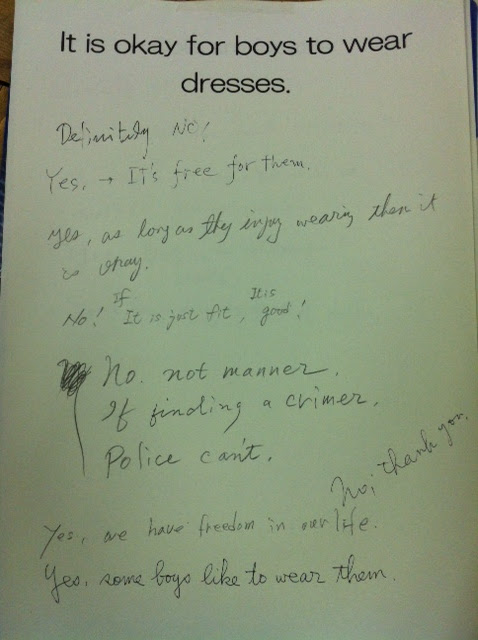 The most fascinating thing I noticed from this, was that on the whole, the women were a little more liberal in their thinking, stating that it's not so terrible for boys to wear dresses, women don't necessarily have to get married etc, though they most likely would not have voiced their opinion in front of the class. The men tended to be a bit more traditional in their thinking, both on paper and in the class. Though some surprised me with a few of their written answers.

I thanked them again and again for their participation, and they assured me they really enjoyed the activity. I walked away calling this one a success.

P.S. Big thanks to my friend Megan for all her help with this lesson and for the article on Sasha! Thank goodness for Gchat!