Slicing & Dicing: Outside the operating room

So, I heard that my last blog post caused a few tears. That was not at all my goal. I was just writing how I felt and I pounded that out during the first few hours I was hanging in the hospital lobby.
I thought you all would like to know that my dad’s surgery went well, as well as possible actually, and at the moment we are kind of in a holding zone until we are able to figure out the next course of treatment. But he is in good spirits and rather active. Almost too active. He has been taking the dog for a walk and helped trim our living room and dining room when it was decided that it needed painting. NOT my decision. Nor was painting it hungover, but that is another story.
Now, knowing that he is doing just fine at the moment, allow yourself to smile as you read about my mom’s and my experience on the day of the surgery.
“Kaaaateeeee you got 5 min!” I heard my mom shout as I threw on a jacket over my stripped shirt and jeans. It was 7:40 and we had planned on leaving at prompt 7:45. The surgery wasn’t scheduled until 12 noon, but patients had to be there at 9am to fill out paperwork, get prepped, and make sure they got as many anxious waiting hours in as possible.
I hadn’t slept, nor had my parents I was sure, though it wasn’t confirmed until post surgery. The past few drives to USC I usually laid out nicely across the back seats and passed out. Cutting the reality of the 55 min drive to a meager 3. Their were perks to not having siblings. And that was exactly what I had planned on doing that morning.
“Here,” my mom shoved a piece of paper in my hand as we walked out the door, “You’re co-pilot.” I glanced down to see a list of freeway numbers scrawled in my mother’s notoriously poor handwriting. Where were my siblings now?
“Are you sure this is a good idea?” I was immediately shot a, “NOT NOW KATE” glance. Ugh. But in fact it was not a good idea. I knew it, she knew it, my dad knew it, even the universe knew it. Anyone that knows me knows that I am terrible at directions. So terrible in fact that it actually borders on impressive.
I vividly remember picking up my friend Tori right after receiving my driver’s license to go to the mall. She hopped in and we giggled about how exciting this was as we reversed out of her driveway. I paused and put my hands to my forehead and closed my eyes envisioning the mall. “OK. Del Amo.” I repeated aloud deep in thought. Mapping out how to get to the mall that was at most 2 miles away. “Seriously,” to stunned to yell, Tori turned to face me, shock bordering on disappointment written all over her face. She smirked and shook her head. “Calm down we’ll get there!” I retorted. And in fact we did. Only after I gave up at the stop sign at the end of her street and asked her which way to turn. She directed us the rest of the way there.
Nowadays my directionally gifted friends offer to drive me places to get around my rarely discussed “handicap”. It benefits all parties involved. This way they can be sure I will show up at all, and I, in turn, arrive on time and significantly less sweaty.
I was already starting to perspire as I stared at the different freeways we were going to tackle while trying to make out the “helpful notes” scrawled between each. My mom was determined to exclude my Dad from any driving duty on the day of his tumor removal. But the rigid positions we had all assumed in the car only added to the unspoken stress. We had the female driver who sat at a rigid 90 degree angle, and whose hands never strayed from the 10 and 2 o’clock position, the beautiful, younger, exhausted female trying desperately to decipher the barely legible nurse shorthand fast enough, and we had the backseat male passenger who was doing his best at following orders NOT TO WORRY about anything. Shockingly, we arrived on time, in one piece and with smilies. It was one for the books.
After parking where we always park, the office structure, we were regulars after all, we headed to the surgeons office in what was essentially the “cancer building” to pick up labs to take to the hospital. We arrived on the 4th floor and followed the signs yelling HEAD AND NECK, there was no hiding why we were there. On our way I passed the COLON sign and cringed. It could be worse.
As we waited for the labs under the Head & Neck sign that must have been in 7,000 point font, my mom let out what was officially the most obvious statement of the day. “You know,” she began, “I always think of head and neck cancer as rare, but when you’re here, it’s like, pffff everyone has it!” 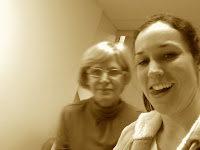 I looked at her blankly and she raised her eyebrows almost excited at her observation,
“Oh hey mom, I forgot to tell you who called.”
“Who?” She asked wondering where the conversation took a turn.
“Captain Obvious, he wants his powers back.”
She chuckled as did I. It was one of our favorites after learning it from my friend Lauren in her days as an elementary teacher. Somewhere along the line my mom and I took a silent vow to use it as often and creatively as possible. I mentally gave myself 100 points for that one. 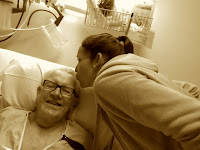 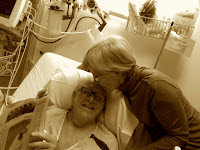 We found the Laker game and waited for his dinner to arrive. And waited, and waited, and waited. After confirming he was ok and appeared to be healing, I was becoming increasingly bored. I played on my computer, my Dad read the paper and my Mom tried to initiate conversation to no avail. Sitting on the side of his bed she threw her chap stick is the air and tried to see how many times she could hit it, preventing it from hitting the ground. Wow.
“Oooo that was 12!”
No one commented.
“Come on Kate, I bet you can’t beat me.”
I raised only my gaze over my computer and gave her my best, You’re kidding right, look. “Does anyone else feel Amish?” I asked. My Dad smiled, my Mom wouldn’t let it go.
“Oh Kate come on just try.” I think we may need to rearrange the parent/child labels.
I got 10 and sat down as my grown mother beamed. Alright, where the hell was my Dad’s dinner?!
Finally dinner arrived ending the inflight chap stick game. Thank God. He ate it all. We were ever so proud. We met the night nurse as we kissed him good bye and headed to retrieve our car. As we left we heard her give him a pee time ultimatum.
“I’ll give you till 9pm to pee,” she said in her Tagalog accent as we exited.
“Or else what?” I whispered to my RN Mom.
She cringed and chuckled, “I think she might cath him.”
PEE DAD PEE!!!
He did. Again, so proud.
We arrived the next day to retrieve him, and we took him home to hang and rest, giving him a new location to cheer on the Lakers and witness all gazillion of the March Madness games. It appears no one else will be watching TV for a while, but I think he earned this one :)
Thanks for all the support, it means so much,