I have arrived in Nihon!

After packing up the remainder of my first big girl apartment in SF and saying a tear filled goodbye to my roommates, I was greeted by my parents and airport bound chariot. The lovely grey Honda CRV was ready and waiting to escort me to my new life overseas. My parents drove me to the airport where I met up with up the rest of the SF crew as we anxiously discussed what was in store. My parents were able to park and sit with me a bit before I had to head through security and board.

The nine hour flight was completely full and rather uneventful. The food and service were AMAZING, leaps and bounds better than any flight service I’ve ever had. As soon as we exited the plane we were greeted by a JET participant about every 10 ft pointing us in the right direction, it literally would have been impossible to get lost. All of them had a smile and an accent; it was amazing to meet so many different people from so many different countries in all of 30 seconds. We then boarded a bus from Narita to , during the two hour drive we signed release forms and made some new friends.

Finally we arrived at Keio Plaza Hotel and were placed with roommates from our departing city. The hotel was completely overrun by JETs. There were about 1,000 of us from certain parts of the , , , , , and . Keep in mind that I was in the second arrival group, and this is happening a total of 3 times. That’s A LOT of JETS! Currently there are a little over 5,000 JETs throughout ranging from 36 different countries. Pretty amazing huh?! 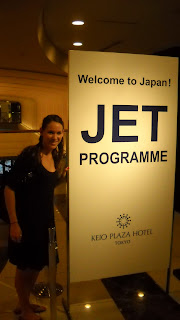 It was interesting to watch the dynamic of the future JETs as we got further and further from home. People were trying to hold on to where they were from all the while trying to find similarities with everyone else. At the SF consulate people were very proud of where they were actually from and quick to rattle of towns in the rather than have be assumed that they lived IN the city. But as we arrived in , you would watch an SF person introduce themselves to a person and one might as well have exclaimed, “Oh my god you’re from the West coast too! Let’s be friends!” By the end of the weekend it was assumed that if you were from the same continent you were destined to be friends for life.

During our 4 days in we attended various speeches and workshops to help prepare us for our new life. Needn’t worry though, I was able to go out at night, discovered some bomb Udon and Korean BBQ and 2 hour karaoke/all you can drink place, Uh, Yes Please! I explored a bit with some new friends from , we took the train to Harajuku, yes as in Gwen Steffani’s clothing line, and Shibuya, kinda the times square of with the huge cross walk that has the cars stop completely while everyone crosses. A-mazing!

For those of you who are wondering, I was able to meet up with Kristin briefly!  Kristin Namimoto is one of closest family friends who just completed her 2 yr in JET and was at the AJET fair handing out information on building houses in  (Go KNam1!). We’re currently trying to figure out a time I can go met her Aunt and cousin before she heads back to the states on the 12th.


After 3 days of orientation and learning more about the JET program, stages of homesickness, and Japanese etiquette than I could handle, I was ready to experience it for myself! The final day of orientation I met with the other 8 Chiba JETs to board a bus and head our new prefecture!
Posted by Kate at 2:29 AM