For those that don`t know, which is probably very few reading this, I am from Redondo Beach, CA. A beach town in the greater LA area and a land of eternal shorts and t-shirts. I grew up 4 blocks from the beach, my High School had a surf team, and as a child I was significantly blonder and tanner than I am now. I am a beach kid for sure. Winter to my knowledge has consisted all of a long sleeve shirt and occasionally a jacket.


Seeing snow and being in the cold has always come in 2 or 3 day chucks, it usually is accompanied by a 2-3 hour drive and a car load of people ooooing and awwwing as the snow appears. Pictures are taken, and we revel in the beauty of the white canvas before getting back in our cars and driving home to the land of year round sandals.

On my bucket list of things to do, is to live in a place with seasons, not necessarily forever, but I feel like it`s something I need to experience. Living abroad is also on that list, I`m killing two birds with one stone over here in Japan.

So as it has started to get colder in Kamagaya I started to get a little bit excited. It was new to have to wear two pairs of pants all the time, to roll over earlier in the morning and turn on the heater. I discovered that scarves have a real function and though it may feel less luscious, a thinner towel works best after the shower because it dries faster. I understand why people have a separate box for their winter clothes, a concept that was completely foreign to me before. Unfortunately I also now understand how easy it can be to gain weight in the winter. Needn`t worry, I joined a local gym with Sinapi:)

My neighbor Kim, from Wisconsin along with my parents, originally from New York and Pennsylvania, chuckle at all these little `discoveries` I have. All of the above have experienced real winter, where I have only experienced as much as a sweatshirt. I excitedly called my parents to update them on the fact that there was frost on leaves as I biked to school one day, then later to ask them if they knew what a difference hats made when you bike?!

My mom exhaled and my dad chuckled. Apparently they did.

When I called my parents again to inform them about another one of my revelations, that I now understand that good socks work wonders, my mom rolled her eyes and again exhaled. I think she feels like she failed as a parent. All my life college was the big priority, the ultimate goal, the carrot in front of the horse, who knew that maybe shipping Kate off to the east for a winter would have educated her in the ways of the world.

Kim was trying to grasp the fact that I`ve never had a white Christmas. Not even close. Our Christmas day generally consists of a walk with the whole family, and the dog along the beach, to get coffee and enjoy the weather.

The teachers at GoChuu for a while were still trying to understand that I don`t have snow where I live. When we had flurries here the other day, I was SOOOOO excited and stared out the window for the better part of the morning. Keima finally took me outside, like a child, to take pictures. He then had to call my name 3 times to pull me away from my enchantment when it was time to go to class. When we got to class, the students were pretty excited about the snow as well, though not nearly as excited as I, and Keima told them all that I had never seen snow. A blatant lie. But we then had a brief conversation about the weather in CA and how it doesn`t snow in LA. And now they know. Something I thought they may have known from movies, but maybe not.

It then semi snowed here another day, and all the English teachers I work with texted me to say they were thinking of me and how excited I must be, which made me smile.

Yesterday was Valentine`s Day and during our little girls movie night, consisting of wine and chocolate, it was apparently snowing. Keima texted me a photo to tell me that it had and I bolted to the window to check it out. When the movie was over we went outside to play. It was still snowing, like falling from the sky snowing!, and we made snow angels and a snow man, complete with a carrot and everything!  It was so fun, and I was loving every second, the wine and sappy movie probably helped too, but it was such a treat.

This is probably the most exciting thing that has happened to me lately so I thought I would share! Enjoy the pics! 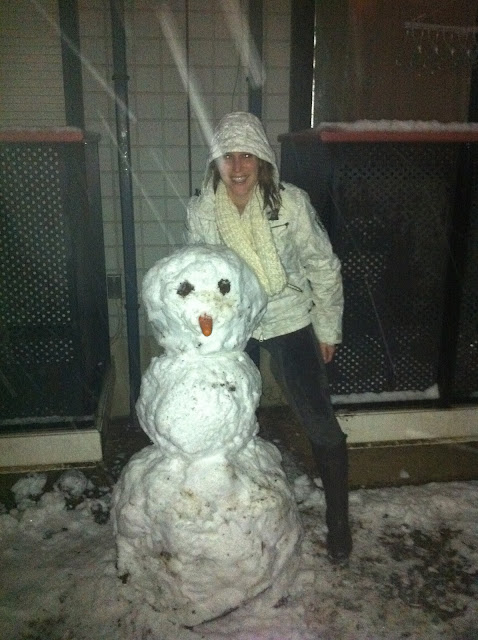 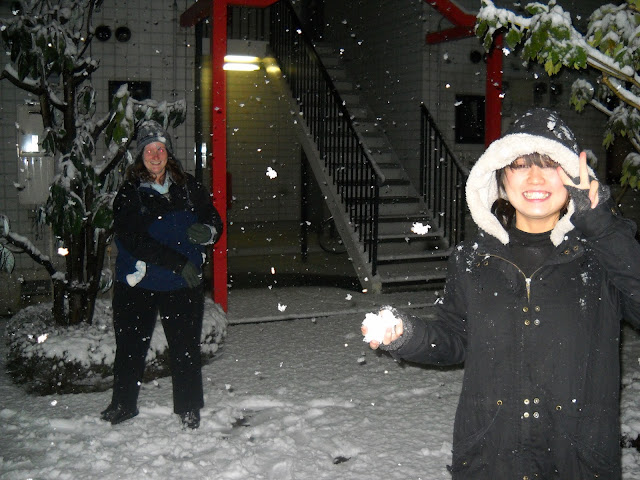 How I Keep Warm
a.k.a. Things I Didn`t Know Existed Until Now

These are just a few little things around my house that simplify my life and keep me warm during this first winter of mine.

Email ThisBlogThis!Share to TwitterShare to FacebookShare to Pinterest
Labels: winter