Return of the Round Eyed

I returned to the lovely land of the rising sun almost 4 weeks ago now, and am thrilled to be back!
After being home for about 6 weeks, a “trip” that essentially was an escape from a national disaster, only to be greeted by a rather dire health situation, I felt like everything that was familiar, everything I had built, had been shaken. My sense of normalcy was gone. Nowhere was how I had left it. 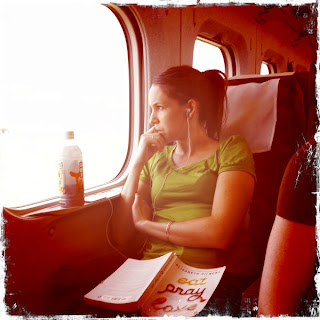 Maybe it was an effort to cope, to deal, to be strong, maybe all three, I don’t know, but I quickly came to realize, that when everything that you have made has been knocked over, you are left with the foundation. The building blocks that allowed you to get so high in the first place. Despite the earthquake, radiation, the cancer, and the unknown of all the above, my parents were still there, rock solid as ever, the support of my friends never faltered, Charlie was still excited to see me, and at the end of the day I was still the same person.
Every day I was in Redondo I was constantly wondering, and being asked, if or when I would return to Japan. My heart was in the east, but my head told me to stay put in west. After a lot of discussion, tears, and stress, it was finally my dad who told me to go. Through tears I started to protest, but was immediately shot down. My dad simply repeated himself, citing that I had found something I love and was making a difference. My mom backed him saying their was nothing to worry about, they would keep me in the loop on everyone’s health, Charlie’s included, and in reality it was only a plane ride away. I had gotten packed and out in 5 hours before, I could do it again, maybe even beat my time next go around.
I awed at my parents understanding and support, and promised to come home during the summer and again at Christmas, I had originally planned on traveling during those times, but my priorities had shifted since first touching down in Japan. 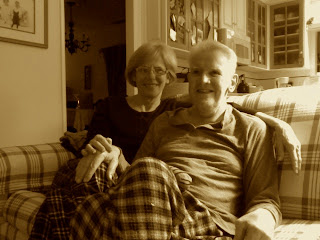 After getting the green light to return, I checked up on the radiation situation and essentially interviewed everyone who was already back in Kamagaya, determining it was safe to return. A family friend who worked for the airlines helped get me an amazingly discounted ticket, a treat for my entire family. The fact that I was upped to first class was unreal. I looked later and the ticket that I paid a mere few hundred dollars for, retails for about $5,000. Kids...it’s worth it. I was legitimately sad when my 12 hour flight was over.
As I landed in Japan my stress level dropped significantly as I embraced the familiarity of Japan. I breezed through customs and grabbed my bags, feeling nice and refreshed after my flight, first class will do that to you. I was thrilled to have my cell phone instantly working again, the sound of Japanese conversations was surprisingly comforting, and I was pleasantly surprised to see the leaves greener and the air warmer than I had left it.
As I settled in on the train for the ride home, I thought about what I was going to face the following Monday, my 1st day back. I would be at my middle school which was comforting in itself, but since I’d left the cherry blossoms had bloomed, signaling a new new school year to begin. Not only had it begun, but it was a few weeks underway. Their would be new teachers at each of my four schools, we had a new schedule that was on a two week rotation giving us now three full days at elementary school. I had also acquired a new elementary school and lost one of my favorites. I wondered how I would be received.


Yes, Japan is an understanding and very empathetic country, and everyone knew about my dad’s situation, but the initial reason I left was the earthquake and radiation scare, which I’m sure they knew. How was I supposed to explain that to people who had been in Japan the whole time with no intention of leaving? Would they even ask?
I didn’t sleep Sunday night. I think I was more nervous than I was my first day of work back in September. But when I showed up, all that fell away. Everyone was SO kind to me and so excited to see me. The older kids squealed with excitement when they saw me walking into school, screaming, “LONG TIME NO SEE!!” while the new middle schoolers simply stared at the new round eyed. Each teacher had their own way of acknowledging that I had been gone, be it with a more sincere, “Good Morning”, or an “Ahhhh Keito”, others asking if my dad was ok. And then their was Namiko, who a shed a tear as I walked in. Telling me later she wanted to hug me, but that wasn’t exactly proper office etiquette.
It was so good to be back.
I met our new Principal, got situated in my new desk placement which now happens to be next to Keima, with Namiko one down. After thanking the teacher responsible for that, I passed out my omiyage. Everyone loved their Reese’s easter eggs and Dodger pens.
Their were few new rules, like where we eat lunch and the fact that the VP is now teaching an English class so I will be working with him, but other than that, by 11am I had forgotten that I had ever left. Which was exactly how I wanted it. The kids got out early, because their homeroom teachers were making house visits for parent teacher conferences. Keima had 37 to visit. I still had to be there until 3, knowing this, the librarian who speaks a good amount of English and is a member of the community center that my Japanese class is through, invited me to make origami with her and some students. It was a lovely change of pace before heading off to city hall for our weekly Monday meeting. 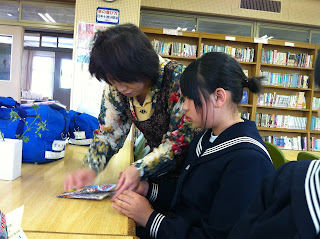 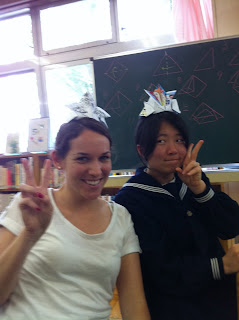 The people at the city hall had rotated too. Apparently that is where our principal had gone, along with one of the teachers I would occasionally talk to in the copy room at middle school. I had found out he had a 12 year old son and at the time of our “conversation” I was making copies of Halloween masks and offered him a few for his son. After that I would give him all kinds of worksheets for his kid. When we saw each other we gave a mutual, “Ahhhh” and a smile. It really says it all.
Toki who used to look after us had rotated out too, and we now had new guy. During our meeting I learned that I wouldn’t be getting paid for the month of April...makes sense, wasn’t here for a day of it. They wanted to make sure I had enough to live on for May, the other ALTs kindly offered to loan me money, but I assured them I would be fine.
Other than that things have been pretty normal. I resumed my weekly Japanese class. Taught elementary school, doing my self into for my new students and making sure the returners had mastered their name. As spring has sprung I’ve picked up running again, this time in a t-shirt, such a treat and started reconnecting with friends that I haven’t seen in quite some time.
It’s good to be back in my current hometown, with the life I’ve created. All the while knowing that my foundation, just as solid as ever, is back in Redondo just as I’d left it.
At home in the east,
Kate
Posted by Kate at 7:25 AM