For those of you who haven’t heard, I had a few visitors this past weekend!!! Renee, my friend and former roommate from college, and A.J. came to to play! They came only for a week, and spent the first portion up in northern with Jessica, my other good friend living here. AJ actually surprised Jessica, and I soooooo with we had video of that! The 3 of them then came to me for a night, before the 4 of us headed off to . Still with me?

is about 4 hours away from me. It took us about an hour to get to Tokyo Main Station where we boarded the Shinkansen, bullet train, which was from there a 3 hour ride to . My lovely guests brought Jess and I American magazines. While everyone else was sick of trains, I on the other hand was eager to read about how to “Win Anyone Over in 3 Minutes or Less”. Wise words Cosmo. Needless to say, I was stoked for the ride and my high quality reading material. It was my first Shinkansen, though I’m sure not my last, and I have to say it was pretty freakin awesome! It goes so fast, quite the SHOCKER since it is called a bullet train. By the way, in case you hadn’t heard, I believe that the bullet train is what just brought our lovely governor over here a few weeks ago. Why Mr. Schwarzenegger couldn’t just have called and inquired about how does bullet trains is beyond me, but who wouldn't turn down a reason to get out of the office?


We arrived at  main station and thanks to our lovely self appointed travel agent, Jessica, she pretty much steered us the rest of the trip. We hopped in a cab to take us to our ryokan. We wanted to make sure Renee and AJ got the most authentic Japanese experience possible while they were here. This ryokan was partly western, though that level varied between rooms. Jessica and I shared a room that was dubbed ‘half-western’ simply because it had a couch. We gave the traditional Japanese, aka couchless room, to our western visitors. This ryokan also provided hairdryers and free wi-fi, both of which I’m sure you could find at any ryokan in the early 1900s.


We walked around the town for a bit, hit up some temples and a convince store. The convince stores, here known as ‘convienees’ have EVERYTHING and are an experience in themselves. They are actually where I pay all my bills as well, no joke. Then it was off to Gion, or the Geisha district. We watched a Geisha show which included some other Japanese art demonstrations like flower arranging and tea pouring. Not exactly an action packed show but still beautiful. We saw some Geisha, or Maiko the step before Geishahood, walkin around, and yes they were real. Though for 100 or so dollars you too can become a Geisha! When we saw the actual accompanied ones, Jessica did exactly what you’re not supposed to do…took a picture right in her face. Though I have to admit that now that we’re home, I am pretty excited we have it. Well done J Brew :)


We went to dinner that night and talked about this magical Geisha land. I am fascinated by them, just as I am the Amish. I don’t really think of myself as someone who is all about girl-power, but man I wouldn’t last a day as a Geisha. We joked that they would tell me to pour the tea and I would simply say, “no”. I do realize there is much more to it than that, trust me, I was Google-ing Geisha’s every spare chance I got, and I understand the art behind it all…promise.

After dinner and some Geisha talk it was karaoke time! In  you generally get your own private room, usually with some sort of drink deal involved, so it’s a flat rate making payment much easier on everyone.


Funny Story: So, during karoke, on the TV as the lyrics are rolling there are always these super cheesy videos playing in the background. During one romantic beachy one, a  sign came up followed by a  sign! There were a few pictures of the pier and our little area, I was sooooo excited to see home! Pretty random, huh?


Sunday was our one and only full day in and man did we make the most of it! Again, following guidance from our travel agent, Jessica Brewka, we took the local bus to see the golden pavilion, which is exactly what it sounds like, a gold pavilion.

Then we traveled a little further south to see the land of 1,000 Torii Gates. Torii gates, pronounced like the name, Tori, are at the entrance
to every temple. Though usually there is only one, this time there were, I think, over 1,000 and they were all bright orange. If you saw the movie Memoirs of a Geisha, there are few scenes filmed here where the little girl runs through them. Which is exactly what I wanted to do. We walked and walked, and only went a fraction of the way into the path that is miles long, which, in case you are curious does actually lead to a temple, tucked inside the mountain. It was AMAZING and my favorite place in by far. 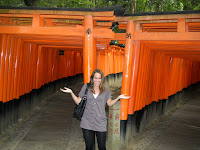 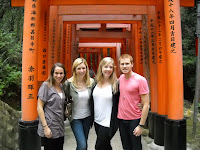 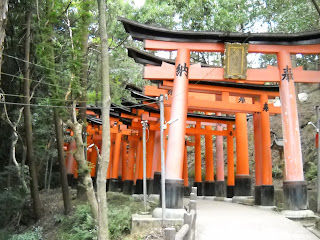 For dinner we found an Irish bar, and I had pizza and beer. Needen’t worry, that American side of me is very much alive and well.

The next morning we took the Shinkansen back to where we parted ways with Jessica, our friend and travel agent. She was headed to board another 3 hour Shinkansen back home and I was staying with Renee and AJ, playing with them for the afternoon in . Renee works at the Four Seasons hotel in northern CA and gets a few comped nights at other Four Seasons, ergo, for their last two nights our round eyed visitors would be sleeping in luxury. I was just there to take advantage of some MTV, the hotel onsen, a fabulous shower and lovely dinner before I headed back home and off to work the following day.


It was a great trip and soooo good to see them! I forgot how much fun it is to travel with a little group of friends. You end up with pictures that are WAY more fun and more memories than just the buildings you saw!

Love you guys so much! Miss you already!