Trip to the North

This past Monday we didn’t have school or work as it was, Health and Sports Day...God I love this country. I have not a clue what that means but I used my free Monday as an opportunity to go and visit my good friend Jessica up in the northern part of , in .

While is not that large of a country, especially compared to the , travel within can be quite expensive and require all kinds of vehicles. My trip to Jessica consisted of an hour train ride to get to where I purchased my Shinkansen, bullet train, ticket. Once I got to the stop in Jessica’s town it was another 40 minute drive to Jessica’s apartment. 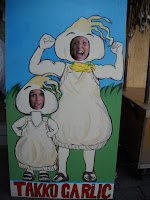 The Shinkansen alone was about $300. To add to the fun, there were no seats left and it was standing room only. So I bought myself a bento box, which I ate in the designated waiting zone, then headed to find my assigned train car and wait in the designated paint area until the train arrived. Everything in  is `designated` so really there should be no question as to where you need to be at any given moment.

When I got on the train it was very clear where the standing room area was. I settled up against the far wall, plopped by bag down, then plopped down on top of it and opened my book. There was no way I was standing for the 3 hr ride. I really wanted nothing more than to sit for the next three hours and read, Eat.Pray.Love. But, no. There was a lady who was also in the standing room only section who kept smiling at me. I was exhausted and still don’t speak Japanese well enough to have a conversation, so every conversation I do have is exhausting in itself. Then at the next stop a young guy, about my age, came in the back area to join the awkward silence. He smiled when he saw me and asked in Japanese if it was okay that he sat next to me. I, shockingly, understood and said sure. I knew as soon as I answered that was a mistake. He then started talking to me in Japanese and I went to my next go to phrase, which is, ‘I don’t understand.’ He then reverted to perfect English. He cracked open a beer and told me he was from , but his parents lived in , which was his stop on this train. I explained my story a bit and then we turned to get the other lady involved. She spoke only Japanese and some English she learned in school. I found out she was 60, though she didn’t look it, and had just come from visiting her grandkids in . She was sweet and so excited to talk to us. Meanwhile, I was still exhausted and finding it hard to be my usual `genki` self. I asked when the little food cart was to come around as I wanted, needed, a coffee. They both told me soon.

We’re now about 45min into the ride and it dawns on me that this lady is still standing, while I and my other same aged friend have made ourselves quite comfortable on our bags. The conductor came up to her and told her that there now is in fact an available seat if she would like it, she must have asked when she got on. She politely said no, and looked at us so sweetly and said that she was having fun. Awwwww:) A few minutes later the coffee thing came around and she bought us all coffee. So sweet! Then she too plopped on the ground, smiling while she did it. This may have been one of the more rebellious things she’s done in her life. I can envision her going back to her friends and saying, `They were just sitting on the floor! So I bought them coffee and joined them.` Both my new friends got off at Sendai, two hours in to my 3 hr ride, and I had a seat for the remaining hour, which was lovely indeed.

I arrived in Jessica’s town with her waiting for me in the car with one of her lovely co-workers. Jessica lives in a small town about 40min from the train station. She also doesn’t have a car, so any time she has visitors or she herself wants to go anywhere, she needs to arrange a ride to and from the station. Her co-workers were so sweet and more than happy to take us. When we finally arrived at Jessica’s apartment, we caught up for a bit and then passed out, we were both so tired. God we’re old.

The next morning Jessica and I enjoyed our convenient store coffee, which was starbucks thank you very much, as we watched the only high school in town perform a traditional Japanese dance all the way down

Main Street
. Apparently learning this dance is a part of their graduation requirement. They danced for about 2 hours and then were headed back to the high school to set up for a festival the next day, which Jessica and I would be attending.

Jessica is working in Takko-Machi as both an English teacher and a liaison between this little Japanese town and her home town of , CA. Gilroy and Takko are sister cities and garlic capitals of there respective countries. Fun fact: The two towns are located on the same latitude, the latitude where garlic grows best. Learned that little tid bit at the Gilroy Garlic Festival pretty cool huh?! Takko too holds a garlic festival in the Fall.

Being that she is here as a liaison, foreign, and the only blonde in a 10 mile radius, Jessica is also a celebrity/diplomat. She is invited to just about every event in town and given prime seating. Then makes her rounds and has some chit chat with the officials. She too is all smiles all the time, saying hello to just about every single person that crosses her path.

Over the course of that weekend we were invited to the high school festival and parade along with the elementary school pageant. As for the rest of the weekend we simply ate our way through it, hung out in sweats, watched TV online and caught up. I, having no internet, was more than eager to get in touch with my American side, aka my American shows and movies that I have been missing out on. We had pancakes for breakfast, ate at the  for lunch, and had a lovely dinner at Ikeda Farms which had the best beef I think I have ever had. It was SO good and went down so easy.

It was at that dinner that someone exclaimed, “Kate! You’re a real person!!” Indeed I am! Both Jessica and I are famous in each others towns as we constantly mention that we have another friend living in . So when I arrived I think they were surprised to see that I was real!

All in all it was a great weekend! Getting to see a new part of this country and catching up with her was great! 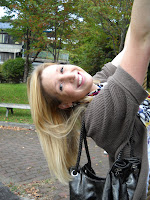 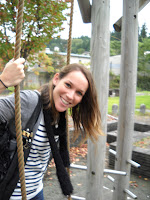 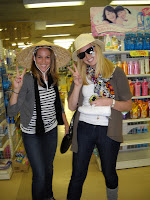 Also, I have officially been accepted to go to  this Christmas! I will be going for a week, Dec 25-Jan 1 and can’t wait! I will be volunteering and building houses. It will be an experience like no other. I’m now off to fill out my visa info and work on Halloween lesson plans!

Email ThisBlogThis!Share to TwitterShare to FacebookShare to Pinterest
Labels: travels