Dinner with the Parents

Since arriving in August with the other new ALT`s, Olivia from New Zealand has been my partner in crime as of late. Considering she's only been in Japan for three and a half months, she has kept herself busy, making friends left and right.

One night, as she was running out of JET Village on her super cute pink bicycle, she told me she was going to have dinner with two friends.
"I told you about my adoptive parents here didn't I???"
The look on my face must have answered it all. She chuckled then continued. Apparently, one night after first arriving in our little town of Kamagaya, she went to eat dinner by herself at an izakaya, a Japanese restaurant/bar.

Side note: Eating by yourself is rarely done at izakayas, and I can honestly say that I have seen a woman do it. But being foreign we get away with a lot. I'm sure people looked at Olivia and assumed she didn't understand the norm, chalking it up to ignorance, when in reality, she knew but simply didn't care.

While she was eating, an older Japanese couple started talking to her, also not usually done, probably curious as to why she was eating alone. Having studied Japanese in university, she is able to communicate, well, I might add, with the people in this country. Olivia explained that she had just moved to Kamagaya to teach English at a middle school here through the JET Programme. The couple apparently also lived near by and exchanged information with Liv, to set up another meeting time. Since their first encounter, the newly formed family have gone to dinner and done other fun things on a regular basis. How cute is that!

Last week, Olivia was set to go with them to dinner and a small jazz bar for dessert, and asked if I wanted to go with. I was very curious to meet these new `parents` of hers so I accepted and we were off. On the walk there she confessed that they were worried about meeting after she told them I spoke no Japanese, which is close to true, but my listening is pretty good and I know enough words to get by. Either way, this language barrier wasn't going to be different than anything else I face on a day to day basis. I wasn't too concerned.

We showed up and immediately hit it off. Alcohol always helps a bit too. We laughed and giggiled our way through dinner and on to the little jazz restaurant, taking the last train home. Who knew what party animals this 60 something couple was?! They then invited us to karaoke the next day at noon, but unfortunately neither of us could make it.
When we got to the jazz restaurant, Olivia explained that on one of her previous outings with her adoptive parents they stumbled across a jazz bar where they began talking to the lady performing, post her performance. She gave them her business card and they had been in communication. We were actually at this restaurant to listen to her. She was AMAZING and so sweet, coming over to say hi after the performance and dedicating a song to Olivia. Both Liv and her new mom sang for everyone, both have amazing voices. While they sang, I did what I do best, sit, eat and smile. 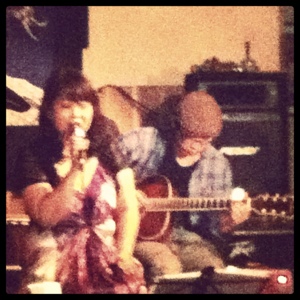 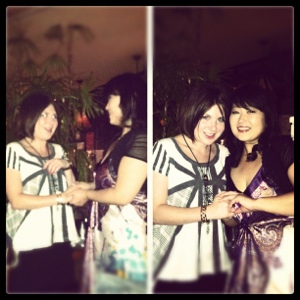 Olivia and the star of the show.

All in all is was a great evening. New friends, good food, a rainy night, jazz and wine make for an excellent combination.


Must Read: Incredible New Technologies You'll See by 2021
Google search: How to upgrade old fall fashions
Tune: Got 2 Luv U By Sean Paul feat. Alexis Jordan
Accomplishment: successful Simon Says~ games in my classes, having a student come out of her shell enough to seek me out to talk to me
Obsessions: 7 Billion People and What's Your Number? -a MUST click