Trippin' with the Teachers

Every year the teachers at school, actually most if not all schools in Japan I would imagine, take an overnight trip. Last year we went to explore a section of Tokyo and see Blue Man Group, you can read about that one here.

This year we were off to a massive spa type place. I can honestly tell you I have no idea where we were in Japan. I was told a few times, though don't remember. At any given moment I understand about 40% of what's going on around me. But I trust these people so I just do what I'm told. I showed up at the train station in the morning to board the bus with everyone else, drove the two hours, got off and enjoyed my time with them in a more casual setting.

We ate amazing bento boxes on the drive there, then promptly played miniature golf. The course was simple and traditional, as if it was a actual golf course shrunk: AKA Mini Golf. Not quite as kitschy as the ones in the states. 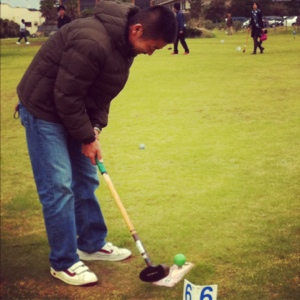 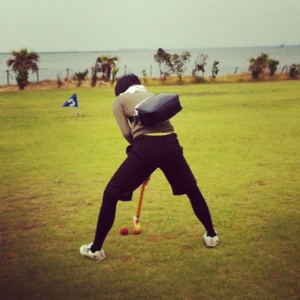 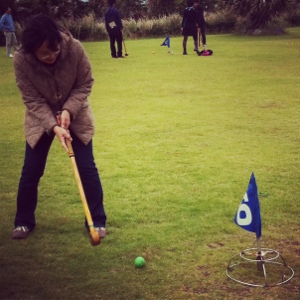 My Golf Team
I actually was the winner of the 4 of us and won a prize!

Then it was free time. We put on these lovely Hawaiian themed gown things that we essentially lived in during our time there, went to an onsen, ate, and relaxed. Then it was time for the enkai. Drinking party. My fave. A few of the teachers got together to put on dance. I also performed a silly magic show with one of the P.E. teachers I work with. He speaks no English I don't speak Japanese, so their was a lot of smiling and nodding, the other teachers loved it. Probably because watching us communicate could be a show in itself. 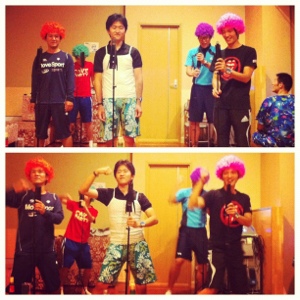 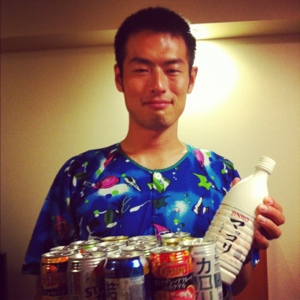 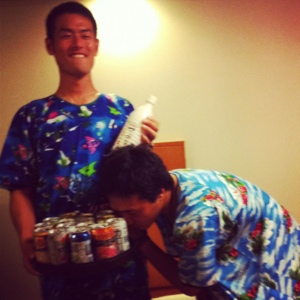 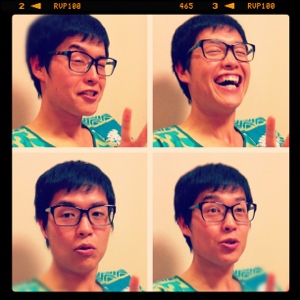 The Many Faces of Keima

The next morning we got up, packed and headed back on the bus to go look at a famous bridge. And that is about all I know. It was a cool bridge. We had about 30 min to walk around, take some pictures, buy gifts if we wanted. I spent most of the time drinking water doing my best to postpone my hangover. 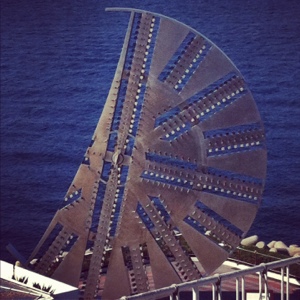 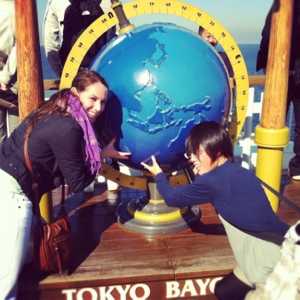 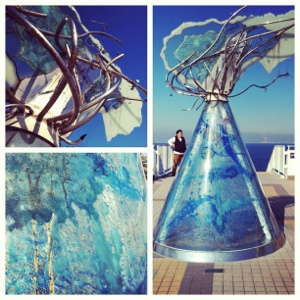 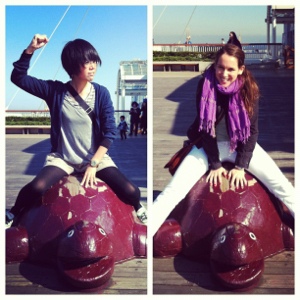 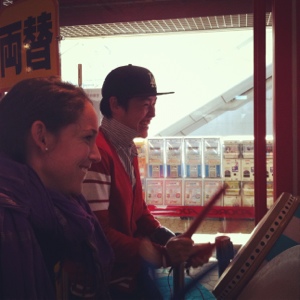 I was pretty much done exploring the bridge after about 7 minutes, as was Keima. So I enlisted him to play me on a taiko arcade game. I love taiko drums, and play this game whenever I see it. I have terrible hand-eye coordination, and given that he is Japanese, I lost. Big time. I kinda want one of these machines for my house. Santa?

The next day was Tuesday and we were back to work. Monday night I didn't feel 100% but chalked it up to a lot of drinking and minimal sleep. Felt nauseous when I woke up, but went to school where I promptly threw up and came home. My teachers were very worried and wanted to take me too the doctor, but before we embarked on a gesture-filled conversation in medical terms, I said let's give it a day. Felt terrible all day and called in sick the next day as well. Slept most of the day, waking only for lunch. I remembered I had splurged at the foreign good store and bought a three-dollar can of Cambell's brand tomato soup which got me excited to eat my first meal in two days. Tomato soup, grilled cheese, and ginger ale, an excellent combination.

A few of my teachers texted me to check on me, reporting that six other teachers had the same symptoms. Weird. No idea exactly what it was, but we're all ok now.

Genki as ever,
Kate

Must Read: The Most Famous Images in the World and How They Became Iconic-from Slate.com
Google Search: Yokohama
Tune: Walk On By U2
Accomplishment: working quite a few days in a row, not procrastinating on my JET Japanese books, starting to organize a massive Thanksgiving dinner in JET Village
Obsessions: repeats but none the less; when parents text website and pinterest