The Only Child Club, International Style

Last Saturday some of my oldest friends arrived in Japan to spend an entire week hanging out with me and exploring this lovely country. Tori, Claire and I have known each other since elementary school and have only gotten closer as we got older.

The girls arrived on a very rainy Saturday night, but we got them back to Kamagaya safely, and dried them off before sending them on the next leg of their journey. The following day they were set to go to Kyoto, so we got them bullet train tickets and sent them south to explore, while I headed back to work.

They returned to Kamagya with stories of their travels, and we plotted out the rest of their trip. The next day was a big Thanksgiving dinner at my tiny apartment. We had about 20 people, Japanese and foreign, many of whom were celebrating their first Thanksgiving. It was an awesome meal! 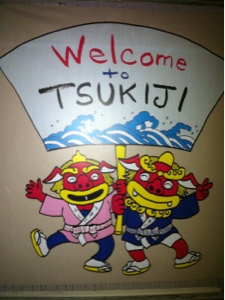 The girls were then off to Tokyo to explore and I was set to meet them Thursday night and stay at a hostel in Tokyo. We got up early Friday to go to the famous Tsukiji Fish Market. It had been on my list of things to do since I got here. We set our alarms for 3am, out the door by 3:30, hailed a cab and were in line by 3:45. The market opens at 5, along with the super fresh sushi stands, but what we really wanted to see was the tuna auction. Only the first 120 people are allowed in. The goal was to be in line by four. We were the third party in line and were very proud of ourselves. Called my parents from the line at 4am to wish them a Happy Thanksgiving as they were headed out the door to dinner. 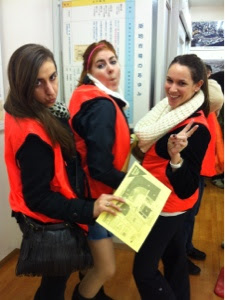 We were ushered into a room and given some information that basically told us to behave ourselves. We were given these bight orange vests to wear so that we wouldn't get hit by the forklifts flying by. I felt like we were in a very cold, outdoor, fishy Home Depot. 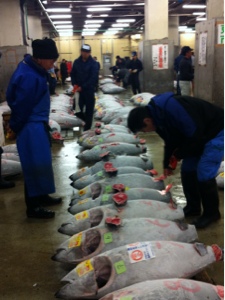 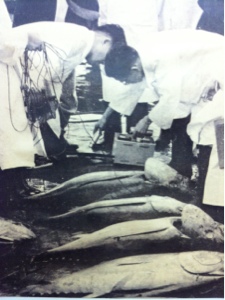 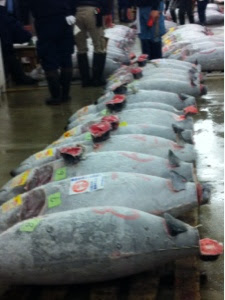 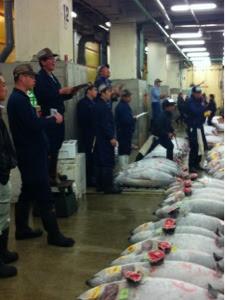 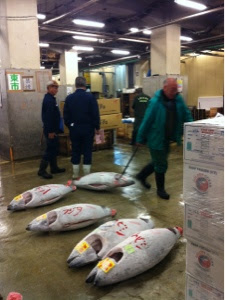 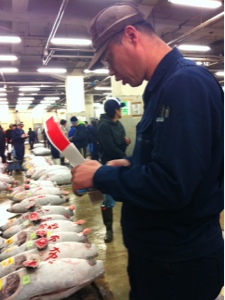 After watching the auction it was time for a sushi breakfast. We waited inline for about an hour for the famous Dai Sushi. I bought the large set, an 11-piece sushi set with the freshest fish I had ever had, at probably the earliest hour I had ever had it. 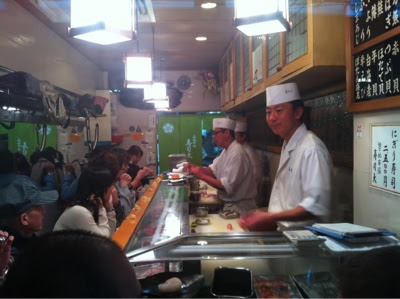 We headed back to the hostel, were in bed by 8, took a power nap and shower before we headed out again to explore the town. We hit up the popular areas of Tokyo, took pics and did all the fun things you get to do when you're a tourist.

The Cast of Characters
During a day of shopping in Harakjuku
We made it to the usual Tokyo hot spots. The girls chose places they had read about and I was in charge of navigating the trains. But the end of two straight Tokyo days we were exhausted. We were set to go out that night, it was going to be an all nighter. Everyone was going to have to rally. As soon as we walked into my little appartment and took off our shoes, it was clear no one was going anywhere. So we opted to have a lovely dinner in. Their trip was nearing an end and I think we all realized that we had yet to actually, hang out. So we did, and it was wonderful. An evening full of wine, food, every trashy magazine that`s come out in the last month (the girls brought them when they came), along with Oreos (also by way of my American friends), good company and conversation. It was a great time.

And just like that the week was over and it was time to head to the airport. I took the girls part of the way before sending them through the turnstiles and off on their own.


It was a great trip! The girls were much better photographers that I was and have many more pics. Tori did a great job documenting just about everything that was put in her mouth. You can see all those pics on her awesome blog, What`s the Story Tori?

Always good to see a bit of home,
Kate

Must Read: This has been circulated for awhile now, but somehow it came up in conversation today. If you haven't read it, get on it...too funny
The Best Roommate Ever -just your average San Franciscan looking for an apartment on Craigslist
Google Search: Tsukiji Fish Market
Tune: Hangover By Taio Cruz
Accomplishment: watching the girls have a great trip, turning in my JET program book 1 on time
Obsessions: gingerbread latte from starbucks, Love Actually, anything that smells like Christmas
Posted by Kate at 7:27 PM

Email ThisBlogThis!Share to TwitterShare to FacebookShare to Pinterest
Labels: visitors