I love living abroad. I have said it before, and I`ll say it again. I love the adventure, the challenge, the daily accomplishments, the new things I learn, about both the people and culture. I love it all. But, everyone once in awhile I have the revelation that Japan will most likely not be the last place I live, which makes me want to run outside and try something new. I want to soak up as much of this country as I can. I want to leave with no regrets. And sometimes that means embracing some of Japan`s randomness, and facing some of my own fears.

While we were waiting for our food their was a jailbreak.

Kris has warned me about these jail breaks, thank god. The lights flashed then dimmed, a siren went off and all the employees donned masks, running around scaring the patrons. Getting in their faces and yelling. All while shooting off fake guns, essentially making as much noise as possible. After that went on for 10 minutes, I let out an audible sigh of relief when the lights returned to full. Though and hour later, it went pitch black as we prepared for our second jail break. Everyone else chuckled that it was happening again. I stayed silent and essentially hopped in my friend Deborah's lap. Turned out it was only someone's birthday.
We were safe. 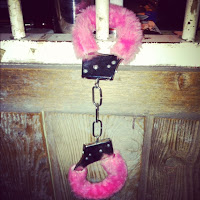 Everyone else at the table chuckled as they realized I really wasn't enjoying myself sans lights. `You're really scared aren't you?` says previously hand-cuffed Kris. I glared at him. No shit Sherlock.
It's my hell. I hate the dark. I hate people jumping out at you. I hate sudden loud noises in the dark. Hate.

Once when I was in high school, my friends convinced me that Knott's Berry Farms', Halloween themed Knott's Scary Farm would be a good idea. I protested, but ultimately went. The damn employees with masks and elaborate face paint, hired to scare the crap out of you, sniffed out my fear. They found me at every turn. At one point I bolted. The wear-wolf ran after me. I turned around, and faced him, decidedly standing my ground. He screamed inches from me. I hit him in the face. He immediately turned into a normal person as I got a lecture about how I would be escorted out of the park if I did that again. And that was the last time I`ll be going back there.

Or to this restaurant for that matter. The experience was fun, weird and different. Glad I went. Never going back. If you come to visit I'd recommend you try it, and I apologize in advance for not going with you.

Enjoy your dinner at Alcatraz/ER, call me when you're done and I'll come meet you,
Kate