This past weekend I had big Sunday plans to head to one of my all time favorite stores, IKEA. My friend Debs wanted new sheets and I wanted a \100 hot dog.
We had a date. 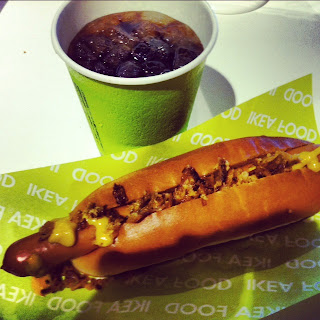 Though we live only a few minutes away, we live on different train lines, meaning our routes to IKEA would different. So, we opted to meet there. What seemed like a smart decision at the time, turned out to be the most detrimental one we made all day.

I got there first and headed to get coffee and wait for Debs, finishing a chapter of my book in the process. When she arrived, I made my way over to IKEA, calling her when I got there.

“I'm in bedding,” she reported.

I went to bedding.
Didn't see her. Called her.

“Nooooo, I'm in bedding in the market place,” she clarified via text.

Went downstairs to the marketplace.
Again, didn't see her. Called.

I did as I was told.

We had about 20 minutes more of back and forths trying to find each other.
Next to lights, under the yellow sign, next to the wall stickers, in mirrors.
She stated once that she was next to the bathroom in home furnishings.
I looked around and didn't see one, then asked if she had built it herself while she was waiting for me.
I was starting hate IKEA.
Finally, I asked what station she got off at.
She reported a different one than I had used, though was quick to clarify that it was next
to LaLaPort (a big mall) and on the same Musashino Line I had used.

“Ok, then lets try this again, head to check out,” I said.

“Are we at different IKEAs?” I offered.
Though thinking that wasn't possible. The others in the country are hours away.
I pulled up IKEAs Japan locations and saw that their was one alternative possibility she could
have gone too, though it was on the other side of Tokyo. I used her location via the app we were
chatting through, and brought it up on MAPS.
I laughed out loud right there in patio furniture.
We were at different IKEAs.