The Norm For Me, A Chuckle For You, 4: Hiroshima Edition

One of the major things Jeff and I were looking forward to seeing in Hiroshima, was the Itsukushima Shrine off the coast of Itsukushima/Miyajima Island. The island itself is a 10 minute boat ride away from the mainland and the city of Hiroshima. The Itsukushima shrine is considered an UNESCO World Heritage site, the Japanese government has declared it a National Treasure, and it has been listed as one of Hayahi Gaho Three View of Japan. Anyone I know who has been says it's a must see. At high tide the shrine looks as though its floating, and during low tide you are able to get up close and personal with it. Anyone that knew I was going to Hiroshima, told me I must absolutely see it, and when I said that it was on our list of things to do they all exhaled with a sigh of relief.
To sum up, it's a big deal.

When we got off the local train in Hiroshima we walked over to look at a map. As Jeff was pointing out where we were (as I have the ability to get lost in a tunnel) I noticed a sign explaining that the Itsukushima Shrine was under renovation due to a massive storm that whipped through Japan on April 2 and 3. Though it was under renovation, the shrine was still open to the public. I was relieved. Jeff sorted us out on the map, we bought boat tickets to use the next day and were off to find our hostel.

Tuesday morning we woke up and threw on some hiking clothes. After visiting the shrine we planned to hike around the island. The man working at the hostel, who at this point was our new BFF, gave us a kite to fly once we got to the top of the mountain. We were stoked. We grabbed our tickets and were off.

We headed to the top deck of the boat and leaned over the side bound for the island. We stared for a solid few minutes waiting for the shrine to come into view.

“I don't see it,”Jeff said straining to look in the distance.

“Me neither,” I replied.

I cut him off mid sentence, when I realized we were looking straight at it. The meaning behind the sign I had read the day earlier kicked in and I realized that the massive thing with scaffolding around it, blending in to the mountain, was it.

“That is it! See the little bit of red at the top, and the grey below. I read a sign at the station yesterday saying it was under construction, but still open so I thought nothing of it. Dude that is it! The big fat famous shrine...with a freakin sweater on.”

“You have got to be kidding! What the hell!”

Just as Jeff said that, the elderly couple to my right, in true Japanese form let out a,
“kirei! sugoy!”

I couldn't help but turn to look at them, checking to see that we were looking at the same thing, then glanced back toward the shrine to check that the scaffolding was still there.
It was.
Beautiful was not the word I going to use to describe it.

Since we went with the intention of taking lots of pictures of this beautiful, massive, historical, gorgeous, floating landmark, that is what we did and I am going to damn well share them with you. 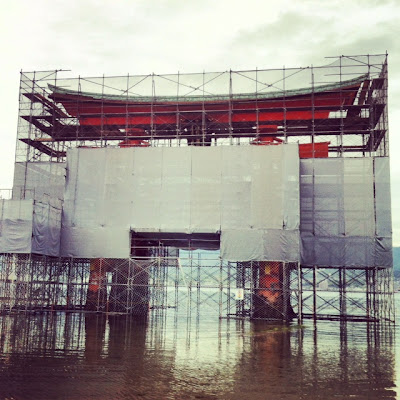 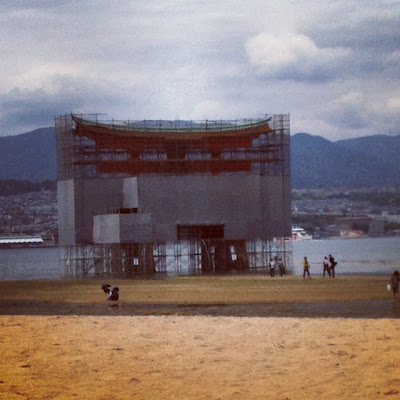 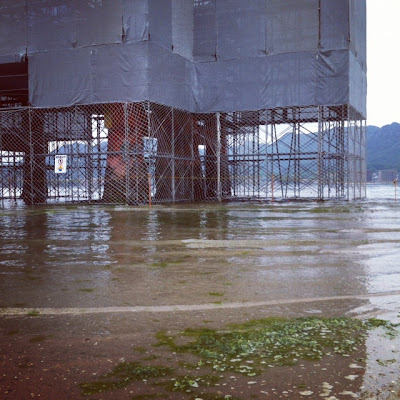 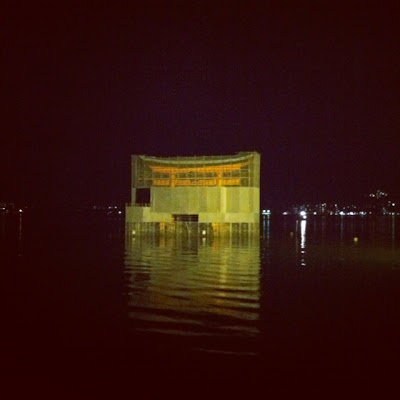 Oh, and there was no wind to fly our kite. Though carrying it up and down the mountain in its packaging was equally as entertaining. Not.

P.S. Read the other The Norm for Me A Chuckle for You posts, here.
Posted by Kate at 7:55 PM

Email ThisBlogThis!Share to TwitterShare to FacebookShare to Pinterest
Labels: hiroshima, the norm for me a chuckle for you