i have always been fascinated with organizations or groups that choose to live differently than the main stream. this has led me to research groups like the KKK, the amish, and strict religious groups extensively. after this recent trip, my focus has turned to monks. they were intriguing with their bright colored robes, wandering about the town. the more i saw them the more i became curious as to what exactly their beliefs were and how they lived. i wanted to talk to one.

the first time i saw a monk on a motorcycle, or moto as they're called in cambodia, i literally laughed out loud. something about the robes whizzing by me as i was in my tuktuk, and the phrase monk on a moto, struck a cord in me. plus, the word monk is just funny. monk.monk.monk. see? ! i believe it was then that i decided to take a picture every time i saw a monk. it became my own secret mission. i felt like a private investigator, as i discretely tried to take pictures of the monks getting out of taxis, or off boats. here is the result of, Mission Monk.


and then my monk dream came true. kris and i were eating lunch in chiang mai with helen and lizzy, two girls from the UK, who we met on our over night train from bangkok. i was flipping through lonely planet trying to decide what we could do that rainy afternoon. and then i saw it. one of those super special blue boxes lonely planet has to show you an activity that is extra special. it read, "monk chat." that was it. we were off. we mapped out the specific temple choices and headed in their directions. i was practically running i was so excited.

when we got to the first temple, a man told us it was closed for the day. we i was crushed. we continued to walk down the street to look at the other temples. as we were inside one, trying to be as respectful as possible, kris silently waved us over and pointed out an open door to a sign across the parking lot. "welcome to monk chat." i let out a gasp squeal as i tried my best to be respectful inside the temple, before walking bolting out the door and across the parking lot. barefoot.

as we walked over to the benches i realized that i didn't know what to say. this coming from a person who had dreamed up questions to ask the monks for weeks. i smiled. the monk smiled at us. then looked from my feet to my face, "where are your shoes?" he asked. valid question sir. uh, well we were just so excited to talk to you that we left them at the main entrance and bolted out the side door.

he led us to a bench and asked if we had any questions. kris, helen and lizzy chuckled and looked in my direction. he followed. i smiled. "i have lots!"i said. he made a gesture that said bring it on. so we did. for about an hour we chatted, and here is what we found out...

-his name was...i don't remember, let's call him mr. monk.
-23.
-became a monk at the age of 14.
-became a monk because his best friend became a monk, though noted that he had always been a temple boy.
-university student at a buddhist university, studying english, and wants to be a teacher.
-first language was karen (hill tribe language), then thai, then chinese and finally english.
-during the rainy season, boys can essentially "try out" being a monk, for weeks or months at a time to see if they like it.
-boys can start being a monk at any age.
-the robes have three parts. shoulder piece, main robe and undergarments.
-the colors of the robes mean nothing. it's personal preference. they cover their shoulder when they are out and about as it is more polite, though less comfortable they said.
-only sees his family maybe once a year.
-he is now a monk at the city border.
-monks can use modern things (i saw one with an ipod so i asked) but they cannot acquire them for themselves. they aren't allowed money. so any modern gadgets etc are donations or presents from family and friends...though these rules differ between temples.
-no signing or dancing.
-only allowed certain types of music.
though mr. monk confessed to liking slip knot, green day and linkin park, then he admitted to singing and sometimes dancing, and then as he was saying all this...he fell of his chair. karma? we all had a good chuckle at that.
-no sports, but individual activity for exercise is ok. ie: yoga, running, push ups etc
-people become monks for their own reasons. not all do it to achieve nirvana.
-can stop being a monk at anytime. mr. monk said he may stop in the future if it no longer serves a purpose for him. 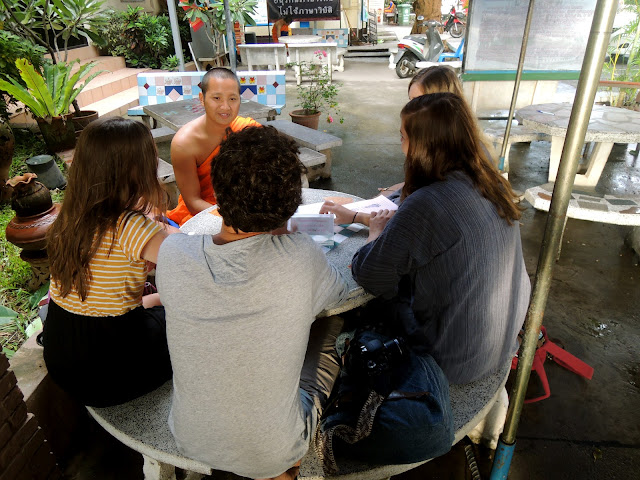 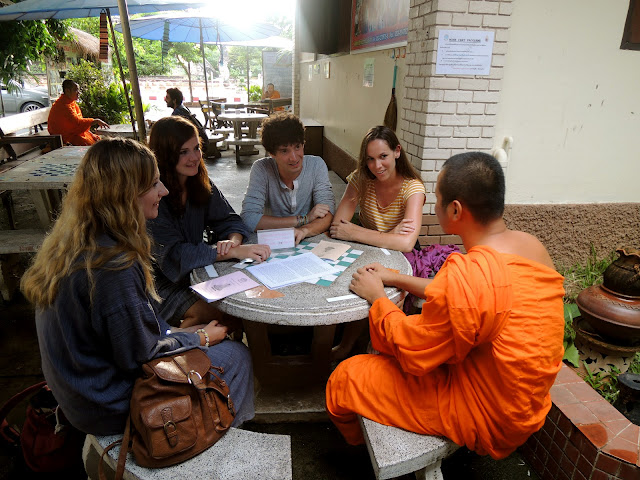 [daily rules to live by...]
-no money.
-no possessions that they bought/acquired.
-no intoxicants...drugs, alcohol, cigarettes etc.
-no sexual activities.
-shaved heads, some cases all body hair including eyebrows.
-no beautification...in some temples this meant no deodorant.
-no eating after 12pm. cannot buy food, they collect it in the morning from donations where they bless those that donate...he admitted he gets hungry in the evening and it can be really tough at times. the city monks are a little more lenient on this and can eat things that are not technically food. so, milk, ice cream, and water are all ok.
-their day consists of waking early, morning prayers and ceremonies, chants, mantras, chores, food, free time, studies and classes.
-mr. monk explained that buddhism teaches restrains, discipline and control of desire. of course they still feel them, as well as negative emotions, but they try to control and understand them.

it seemed like a life that would take some definite getting used to. but mr. monk and his friend who also joined us, seemed completely content. frequently stating that no one was making them do this, and they could leave whenever they wanted. they seemed generally really happy, it was lovely to see.

and in case you're wondering, cause i was, he does have a facebook. but forgot his password. fail mr. monk.