when kris and i were planning this trip, we knew we wanted to incorporate elephants somehow, and we knew thailand was the place to do that. kris and i both agreed that we wanted a place that was legit, less touristy (if that was at all possible), and above all, really took care of the elephants. after a bit of research and talking to others, we settled on patara elephant farm in chiang mai. (thanks josh!) we had been warned that it would be one of the more expensive things we would do, which it was, but would be completely worth it, which it was.

the patara people arrived early at our hostel to pick us up for a day of elephant fun. kris and i had been up for hours, ready with excitement. it was christmas in august...in thailand. we drove for an hour or so up into the hills of chiang mai. we met with the others in our group, it was a small group of 12, which was lovely. we were led on a 20 minute walk up the mountain, and paused half way up where a family of elephants was having breakfast. we instantly got out our cameras and took an obscene about of pictures. the guides brought over bananas and bamboo shoots for us to feed to the elephants, and encouraged us to pet and touch them.

we were all so giddy about being so close to them. but this was just the tip of the ice berg in terms of how much experience we were going to get throughout the day. 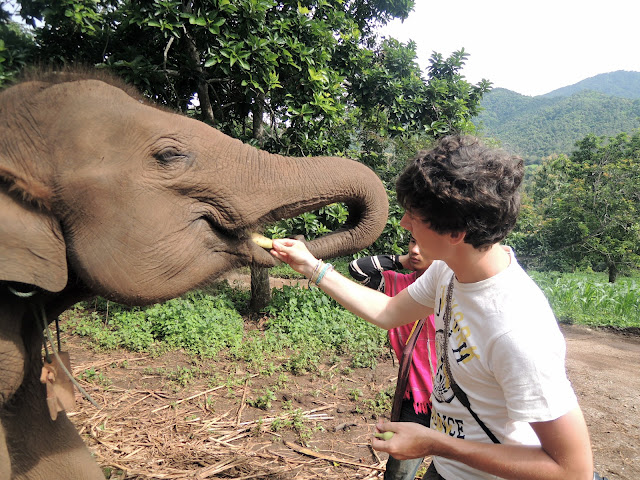 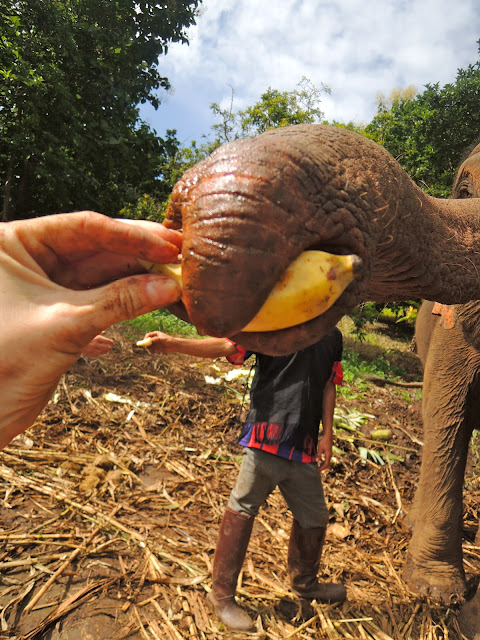 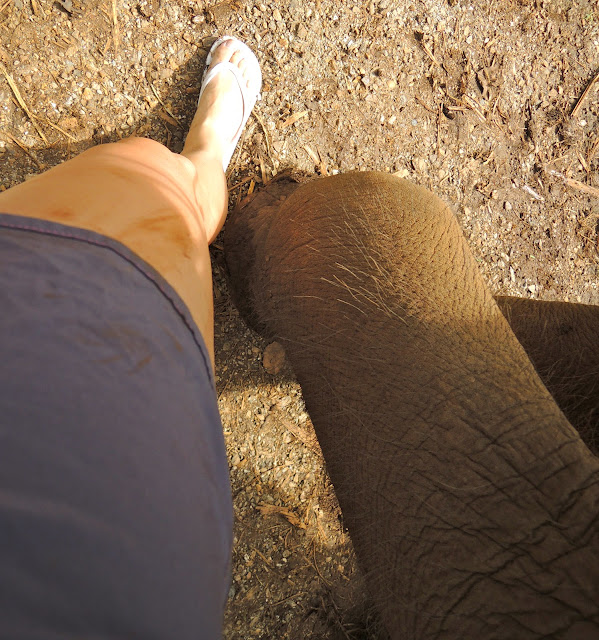 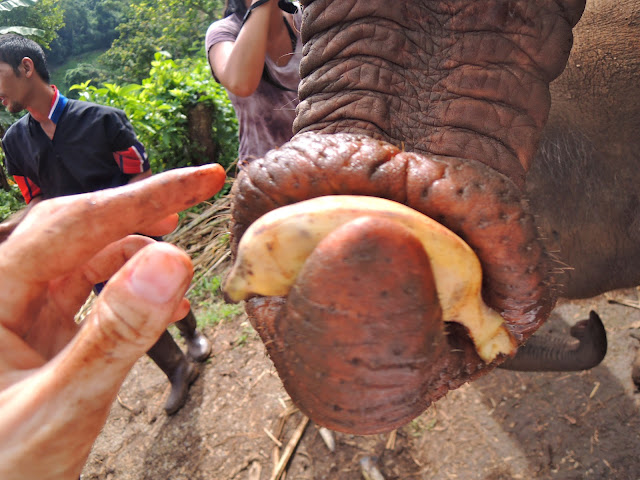 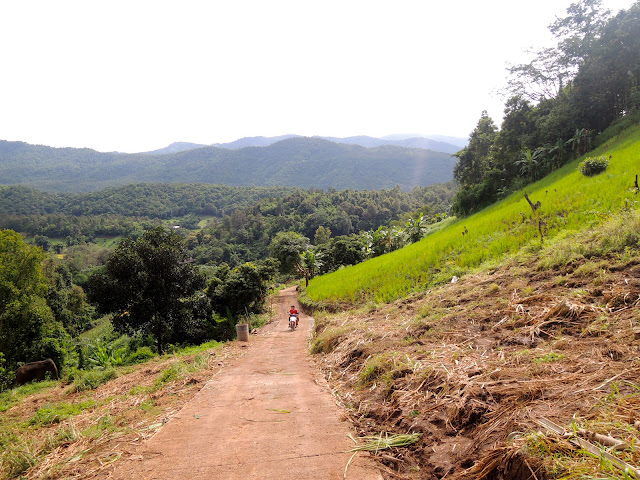 after another 10 min walk further up the hill, we were given a bathroom break and bottles of water. patara did an awesome job of making sure we stayed hydrated. we then received a short orientation about how the day was going to go.

we had signed up to be "elephant owners for a day". so after orientation we were all paired up with an elephant and a trainer to begin our day of caring for these gentle giants. we learned how to do a health check on the massive mammals, as well as how to feed, walk, bathe and command the elephants.

and now you speak as much thai as these elephants.

every elephant had a trainer. ti lo su's trainer was 24 year old tip. tip was quite a character. he spoke more english than any of the other trainers, which had its pros and cons. upon first meeting him, i asked some polite question like, "how long have you worked here?" he responded with, "4 years. do you have a boyfriend? do you have facebook?" so it's gonna be like that, is it? but he was darling, extremely helpful, and really sweet. he offered to hold my camera and i told him to take pictures of whatever he wanted. which he took to mean, take a picture every time kate (or keet at he called me) blinks. i kid you not i have over 400 pictures of me from that day. and here i was worried that i wouldn't get as many as i wanted. thank you tip!


we rode the elephants for about an hour, then walked the last bit. they're not the quickest movers but i'm convinced part of that was because they kept pausing to eat. all. the. time. their little trunks were all over the place constantly lookin for a snack. those little trunks are like vacuums that've gone rogue. 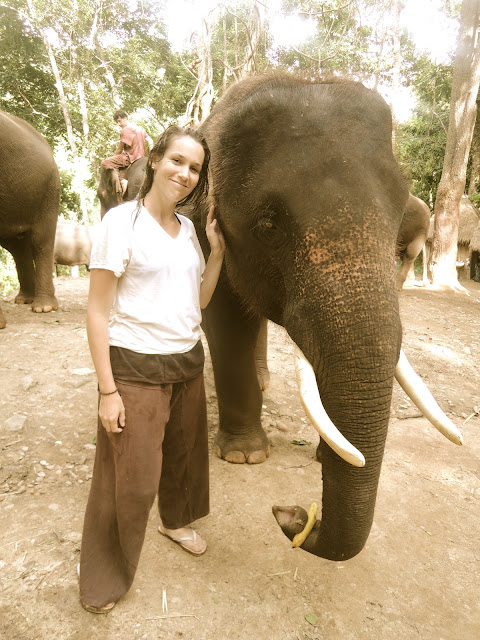 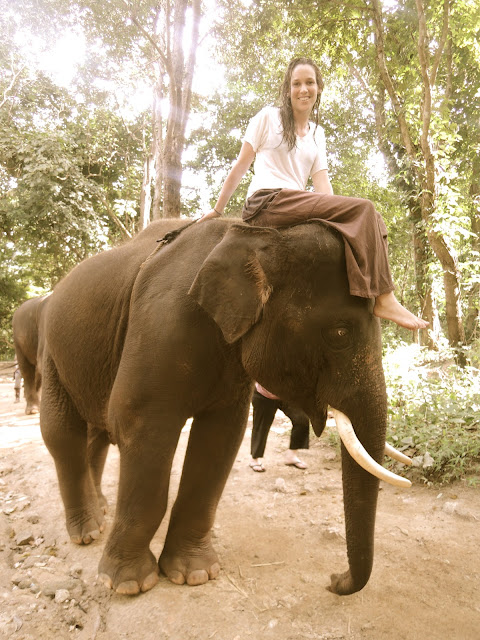 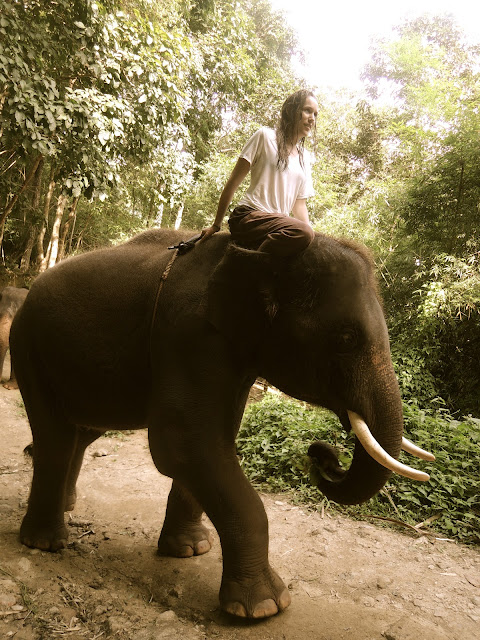 and then it was time to say goodbye. i patted ti lo su. he exhaled. i gave tip a hug. he gave me his phone number. i compensated and said we'd be facebook friends. he was satisfied with that. then patara drove us back to our hostel where we proceeded to tell everyone and anyone, who would listen, about what we had done that day. we were on a definite elephant high.

i cannot express enough how amazing patara was. they were completely legit, and did amazing work caring for these elephants. as elephants are dying out, patara's goal was to do what they could to help that situation. they work hard to keep the elephants healthy and happy. in the past 18 years they have had no deaths. they have also had a quite a few births, and just while we were there 5 elephants were pregnant. id say that's pretty impressive.

p.s. a baby tiger video in case you're interested!